A Maryland man is repairing bikes in his Potomac neighborhood for free in what he calls his pandemic bike repair shop.
Listen now to WTOP News WTOP.com | Alexa | Google Home | WTOP App | 103.5 FM
(1/5) 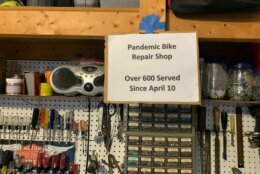 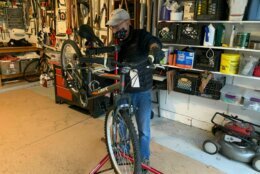 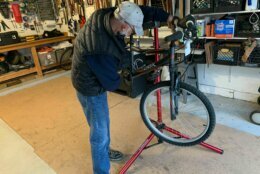 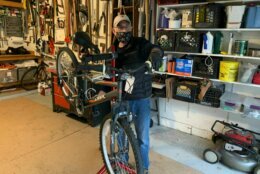 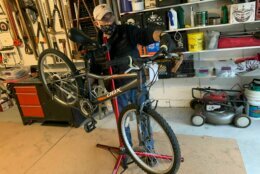 When Ric Jackson opens his home’s garage in Potomac, Maryland, there are no cars inside, instead there is a line of bicycles next to a very organized workbench with a paper sign that reads, “Pandemic Bike Repair Shop. Over 600 served since April 10th.”

“I love working on bikes, I love taking an old thing that’s really rusted and beat up and turning it into a thing of — in my view — beauty,” Jackson said.

When the pandemic began, Jackson answered a neighbor’s call on social media for help fixing a bike. Jackson, an avid cyclist who taught himself how to do repairs, worked on the bike for only the cost of parts.

Then he decided this could be a way to give back to his community during the pandemic and get more people riding. So he offered to help to any of his neighbors get their old bikes rolling.

“I was happy with being able to keep both of my cars in my garage and shortly after that I couldn’t get my car in there if I tried to because I’ve had so many bikes,” Jackson said.

He said many people who come to him have bicycles that repair shops would probably turn away due to their bad shape. But for some people, buying a new bike isn’t an option right now, he said. That’s why he decided to dedicate his time to helping those folks.

Although he is offering hours of free labor, Jackson said doing this is worth it to him, since it is helping him through the pandemic.

“It has actually been a lifesaver, in a sense, for me, too because otherwise I’d be reading books and riding my bike, which is OK, but you know after about six months or something like that, you’re looking for something else to do,” Jackson said.

Aileen Goldstein, of Rockville, decided to dust off two of her bikes, which were stored in her basement for years, so she could go riding with her 4-year-old daughter, who was learning how to ride.

“He is modeling for the rest of us what it means to be neighborly in a year when we most definitely need more of that,” Goldstein said.

Sparked by Jackson’s actions, Goldstein said she has had multiple discussions with her daughter about giving back to the community. Those talks inspired her daughter to give back over the holiday season.

The payoff for all the hard work is simple, according to Jackson. It’s the look on people’s faces when they come to pick up their bikes, some saying with excitement, “Is that my bike?”

He said it has also given him a chance to meet his neighbors, who now wave at him as they ride by his home on the bike he fixed.

Jackson recalled one father who sent him a message after he fixed his bicycle.

“Saying, ‘I had my first daddy-daughter bike ride.’ And that’s why I do it,” Jackson said.

Jackson won’t accept money for his work, but he laughed as he recalled the many people who came to pick up their bikes, bearing baked goods, such as brownies, pumpkin bread and chocolate.

“I eat well,” Jackson said. “My freezer is full of pumpkin bread.”