Restoration work could resume this fall on historic Maryland cottage

Restoration work could resume this fall on one of the oldest buildings in the D.C. region — Magruder's Blacksmith Shop, a stone cottage in Potomac, Maryland, built four decades before George Washington laid the cornerstone at the U.S. Capitol.
Listen now to WTOP News WTOP.com | Alexa | Google Home | WTOP App | 103.5 FM
(1/4) 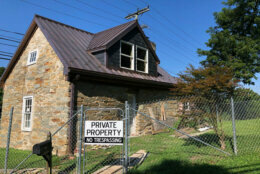 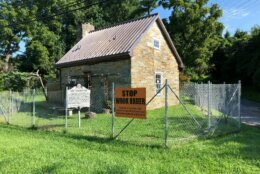 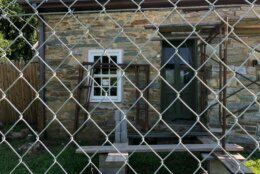 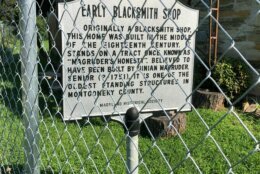 Restoration work could resume this fall on one of the oldest buildings in the D.C. region — Magruder’s Blacksmith Shop, a stone cottage in Potomac, Maryland, built four decades before George Washington laid the cornerstone at the U.S. Capitol.

The small stone house, the oldest building in Potomac, is a familiar landmark on River Road at Seven Locks Road just outside the Capital Beltway. But when its new owner installed a copper roof last summer and made other changes to the historic structure, the project was slapped with a “Stop Work” order, requested by the county Historic Preservation Office.

For nearly a year, the cottage, believed to have once been a blacksmith shop, has been bracketed on one side by scaffolding and surrounded by a chain-link fence.

“I was shocked to see that copper was not an approved material. They explained to me the historical reason as to why that is,” said Gus Stefanou, a Gaithersburg accountant who bought the historic building early last year. “It’s the oldest structure in Montgomery County, thought to have been built somewhere around the mid-1700s.”

Stefanou also had installed vinyl windows against the historic character of the building.

Since the county ordered work to be stopped on the stone house last year, Stefanou has worked carefully with the Historic Preservation Office to ensure that the improvements he makes adhere to the structure’s history, according to Rebeccah Ballo, historic preservation supervisor with the Montgomery County Planning Department.

“The project now has been cleared by the historic preservation committee … I’m all about it being correct,” Stefanou said.

Planning Department documents indicate that Stefanou’s second round of restoration plans were approved by the Historic Preservation Commission on June 29.

Stefanou is hoping that the work can resume on the historic house this fall.

“It’s a top priority for me. I do not like seeing the property in the current state it’s in,” said Stefanou.