Jury selection began Monday in the trial of Montgomery County police officer Kevin Moris, who is accused of assaulting a suspect in an incident that was caught on video over the summer.

Moris, 32, is one of several officers involved in arresting a man outside a McDonald’s in Aspen Hill, Maryland, in July.

In a video that was widely shared on social media, the man is seen laying on his stomach, handcuffed. He lifts his head to yell at officers, and Moris is seen dropping to one knee, hitting the man in the neck and driving his face into the concrete. The officer then pulls the man’s shirt over his face as he spits out blood.

Moris was assigned to administrative leave and his police powers have been suspended. He has been charged with second-degree assault and misconduct in office.

There was no police body-cam footage because the arrest involved plainclothes officers, according to a police spokesman in July. The officers were part of an undercover operation for a suspect selling psilocybin mushrooms, police said in an earlier statement.

The handcuffed man was later identified as 20-year-old Arnaldo Pesoa, who officials said was found to have drugs in his possession and faced multiple charges, including possession with intent to distribute, resisting arrest and second-degree assault.

“I am troubled as someone who has been involved in law enforcement for a very long time in this community,” said Montgomery County State’s Attorney John McCarthy after Moris was charged. “One of the fundamental things that I think is most important about this case is trying to rebuild public trust.”

Opening statements in the trial are expected to begin later this week. If convicted, Moris could face up to 10 years behind bars.

The language in the video and the tweet could be offensive to some; the video is available here.

WTOP’s Kate Ryan and Nick Iannelli contributed to this report. 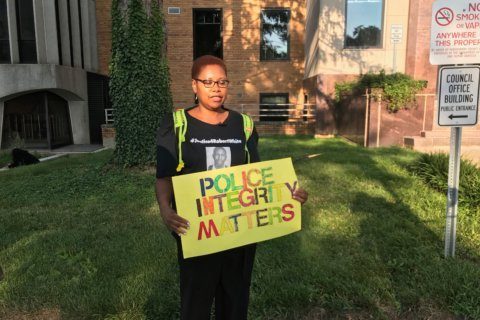