The council held a public hearing on the measure Tuesday night — the same day that a county police officer was charged with second degree assault and misconduct for kneeing a handcuffed suspected drug dealer.
(1/5) 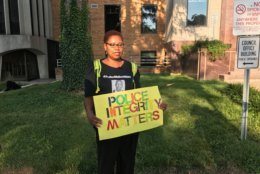 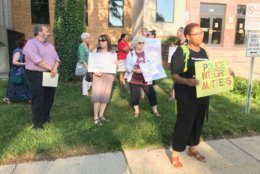 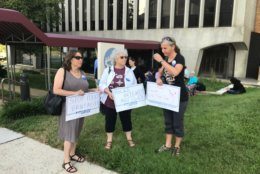 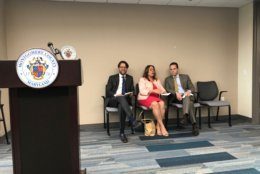 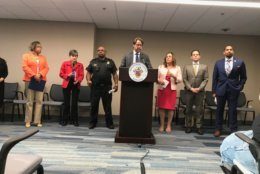 The Montgomery County Council in Maryland has moved a step closer to creating a 15-member commission that would advise the council of police practices and policies.

“The very mission of police work and public safety is at stake and we need to reinvent policing in this new world that we’re in,” said council member Hans Reimer, chief sponsor of the bill to create the Policing Advisory Commission.

The council held a public hearing on the measure Tuesday night — the same day that a county police officer was charged with second degree assault and misconduct for kneeing a handcuffed suspected drug dealer. The officer’s actions last week were captured on cellphone video.

Protesters outside council chambers said they were pleased Officer Kevin Moris is facing charges over his use of force during the arrest at the Aspen Hill McDonald’s, but added that other officers who stood by must also be held accountable.

“They not only failed to respond, but they were standing around and apparently were quite comfortable with the officer’s behavior. That tells me that this is a departmental culture problem,” said Carlean Ponder, an activist with the Silver Spring Justice Coalition. “I would like the State’s Attorney’s Office to look into charges against those officers as well.”

At a news conference preceding the public hearing, council member Will Jawando, a co-sponsor of the measure to create the policing advisory panel, said the panel is needed to confront the disproportionate number of arrests of African Americans.

“Last year, for example, nearly half of the arrests were black people and we represent 19 percent of the population in the county. You need to know why that’s happening,” Jawando said.

A couple of demonstrators sought to disrupt the news conference, shouting out derogatory remarks including “shame.” The demonstrators complained that the proposed commission’s authority is too weak to challenge police conduct.

Acting Police Chief Marcus Jones said creation of an advisory panel “makes sense,” but expressed concern that it could send a troubling message to rank and file police officers.

“That is a concern of us in the police world … we have one of the safest communities in this country … we need to make sure our officers have a high level of morale,” Chief Jones said, adding that it’s important police don’t believe “all of the community is against them.”

The council will consider the proposed commission in September and is expected to vote on the matter this fall.