Several people are injured, including one who was taken to a burn unit, after a fire in a Montgomery County, Maryland, apartment building.
Listen now to WTOP News WTOP.com | Alexa | Google Home | WTOP App | 103.5 FM
(1/4) 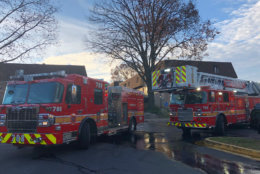 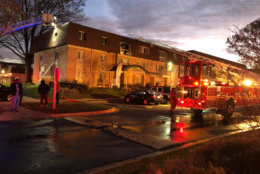 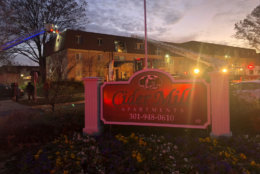 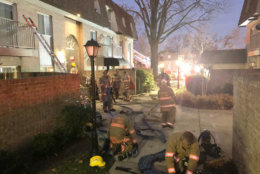 Ten people, including six people from the same family were taken to a hospital after a fire in a Montgomery County, Maryland, apartment building.

The fire happened Friday morning in a three-story building on Lost Knife Circle in Montgomery Village. Nine apartments were affected by the fire and around 45 people have been displaced.

Four children and six adults were injured, but none of the injuries were life-threatening, according to Montgomery County Fire and Rescue.

One person’s injuries were burns and another sustained serious injuries from jumping. Most of the others suffered smoke inhalation, spokesperson Pete Piringer told WTOP. All of their injuries were not life-threatening.

The bulk of the fire, which likely started in the living room and extended into the kitchen, had been put out by 6 a.m.

The building was evacuated while firefighters handled the flames.

Most of the fire was confined to the apartment it began in, but there was some smoke penetration on the third floor, and water damage below.

Around 75 firefighters responded to the scene.

WTOP’s Neal Augenstein is at the scene. Check back for updates.