How Montgomery Co. police safely arrested a knife-wielding man at a 7-Eleven

Several police officers in Montgomery County, Maryland, are being credited for de-escalating a situation last week involving a man with a knife.

It started the evening of Nov. 20, when the 911 call center received a hang-up call from the 7-Eleven at 13001 Wisteria Drive in Germantown, Maryland. The 911 call taker called the store back, and police said an employee responded: “I cannot talk to you because I have trouble. Can you come fast? Please help!” The call then disconnected.

A store employee had called police after a man, who was upset that he couldn’t return a cellphone, pulled out a knife, police said.

Officer Laura Myers first responded. when she looked through the windows, everything seemed calm, she said. But when she went inside and asked the employee if everything was OK, they said, “No, he’s armed with a knife!”

The employee, police said, then pointed at 47-year-old Rodney Taylor-Smith of Germantown, who was behind the counter, holding a knife with blades on two sides.

Myers said she told the employee and others inside the store to move away from the man, and she then radioed for backup. Some went to the back of the store, while others ran out a rear door.

In a seven-minute video of police body-camera footage from one of the responding officers, a stun gun could be heard going off as the officer approached the store. Myers said a thick jacket and loose fitting pants made using the stun gun unsuccessful.

The visibly distraught man stood in front of the counter inside the store as several officers positioned themselves outside the open front doors. Several officers had their weapons drawn, but Sgt. Mathew Krest said they continued encouraging him to drop the knife.

“I didn’t want my officers to have to shoot somebody in a situation like this. We certainly didn’t want that to happen to him,” Krest said.

At one point, Officer James Logan tried an idea: The man had told the officer to put his gun down, so Logan holstered it, knowing his fellow officers would cover him.

“If you put the knife down, I’ll put my gun down, and we’ll figure it out,” Logan can be heard saying on the video.

Logan can then be seen raising his hands in the air and encouraging the man to do the same. The man didn’t drop the weapon but did, at that point, put the knife in his pocket.

The man can be heard telling the officers to come and reactivate a cellphone, and Krest can be heard responding “not until … you’ve got to put the knife on the ground, sir.”

“You’re trying to keep them in reality and they’re drifting away from it, and you’re trying to pull them back into it,” Krest said of the more than six minutes of negotiations with the man.

In the doorway, Krest can be heard planning to use a snow shovel near the door to keep the man from hurting anyone with the knife. Krest said the shovel would help serve as a barrier.

Before the officer could grab the shovel, the man began walking toward the front door, and that’s when Krest decided it was time to tackle him to the ground, which the officers did. Krest said he realized the danger that decision posed to him, because the man still had the knife.

“If he decides to get that knife out and come at us, one of us is getting stabbed, even with the guns out and trained on him. Somebody’s getting stabbed before he gets shot,” Krest said.

Cmdr. Mark Plazinski, who leads the 5th District police station, commended his officers for how they handled the situation, which he said included remaining calm as they spoke with the distraught man.

“I encourage people to watch the entire seven-minute video to just see, because I think it’s a textbook case,” Plazinski said.

Contrast that to last week’s incident, in which Montgomery County police said no one was hurt. Taylor-Smith was charged with multiple counts of first-degree assault, second-degree assault and reckless endangerment. He is being held without bond. 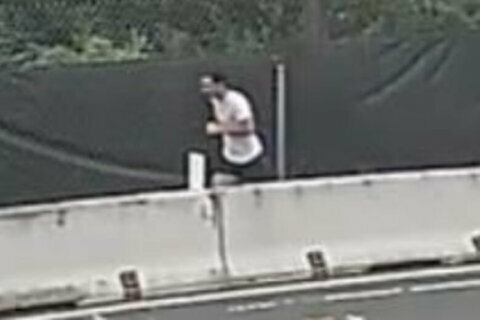