Police in Montgomery County, Maryland, say two teen girls were assaulted and robbed by a group of six young women inside a Silver Spring mall, and they’ve released video of the attack in hopes of identifying the suspects.

A 16-year-old girl and a 17-year-old girl were inside a restroom on the fourth floor when they were confronted by six other young women who began to assault them, according to police. When the teens tried to exit the bathroom, the six attackers continued assaulting the girls in a hallway outside the restroom and then stole some of their property.

The surveillance video released by police shows the crowd of young women crowding around the two victims, appearing to laugh and smile as they pummel them with punches. During the attack, others in the group are seen gathered around holding up their phones, apparently filming it.

By the time police arrived, the suspects had all fled. The two victims “were clearly in distress … They were upset, shaking, crying,” said Officer Rick Goodale with Montgomery County police.

“Both of our victims said they had no idea who these people were,” he added. “They’ve never met them before; never had any interaction with them before.”

Police believe the six attackers are also in their teens. They are expected to face felony robbery charges.

Police asked anyone with more information about the suspects of the robbery to call 3rd District Investigative Section at 240-773-6870. If you want to remain anonymous, you can call Crime Solvers of Montgomery County at 1-866-411-TIPS (8477). Crime Solvers will pay a cash reward of up to $10,000 for information that leads to an arrest in this case.

Group sues police for any videos of man’s fatal shooting 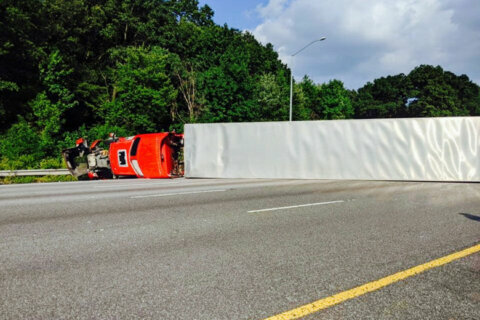