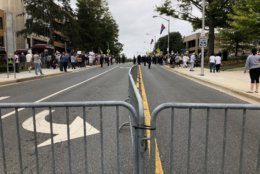 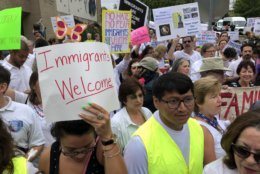 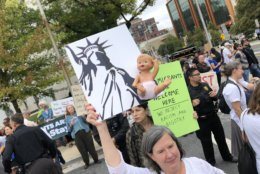 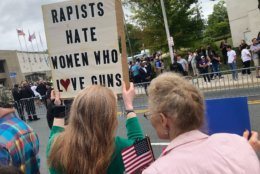 Several hundred protesters on both sides of the contentious immigration issue — and a recent Montgomery County, Maryland, executive order — had their say in downtown Rockville on Friday, which resulted in limited road closures and increased security.

Pro-immigration groups, including CASA de Maryland and MoCo Stands with Immigrants, protested nearby.

Signs read: “Demonization of immigrants has no place in Montgomery County” and “No hate, no fear, immigrants are welcome here!”

On the other side: “Rapists hate women who love guns.”

The protest groups were restricted to the sidewalk areas on both sides of Maryland Avenue, which had temporary fencing in place to physically separate the groups.

Nearby roads were closed for the protests, including Maryland Avenue between Fleet Street and E. Jefferson Street. Vinson Street was also closed.

Elrich said the executive order doesn’t change the stance of county police on cooperating with ICE requests for notification of the release of people charged with serious crimes.

“The County’s Department of Correction and Rehabilitation will notify ICE if the suspects become eligible for release, but until then, they will remain in our custody until the local legal process is complete,” Elrich said in a statement.

The group says people in the country illegally are being allowed to commit crimes, labeling Montgomery County a “sanctuary city.”

Since July, “Help Save Maryland” says at least eight “illegal aliens” have been charged with sex crimes in Montgomery County.

Brad Botwin, director of the group is demanding “Marc Elrich and the entire Montgomery County Council begin working with federal Immigration and Customs Enforcement agents to remove illegal alien criminals from our streets.”

Ahead of the protest, the principal of nearby Richard Montgomery High School sent an email to the community saying students will not be permitted to leave school grounds for open lunch, Friday, after collaboration with school system and police leaders.

“Some of our Richard Montgomery students have informed me of their interest in participating in this protest,” wrote principal Damon Monteleone. “While MCPS supports their right to peaceful assembly and free expression, the circumstances require us to take action to ensure all students are in a supportive and safe environment.”

“There has been some confusion about Montgomery County policy when it comes to undocumented individuals charged with serious crimes and how we interact with Immigration and Customs Enforcement,” Elrich said.

Currently, when ICE agents take custody of undocumented immigrants at the county detention center, the transfer happens in the lobby. ICE has said that puts agents in a dangerous situation.

Elrich is weighing allowing the transfer to occur in a more secure location.

View a map of the road closures below.