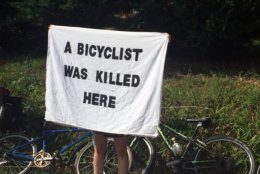 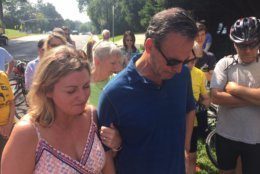 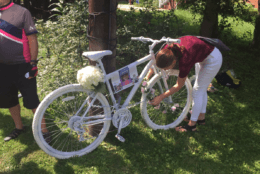 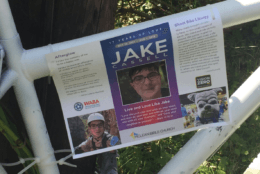 A driver struck and killed Jennifer DiMauro, 31, of North Bethesda, as she walked across Tuckerman Lane at Kings Riding Way on July 24. The intersection is near the Tuckerman Station condominium complex.

A week later, a driver struck and killed Jacob Cassell, 17, of Bethesda, as he rode his bicycle near Old Georgetown Road. The Winston Churchill High School student was known for his open heart and kindness.

A “ghost bike” was installed at 10:30 a.m. Saturday at the intersection of Beech Avenue and Old Georgetown Road.

An 11 a.m. rally to advocate for safer road designs was held at the Bethesda Trolley Trail crossing of Tuckerman Lane to remember DiMauro.

“This is a hard day for us. In fact the last 15 have been very difficult,” said Steve Cassell, Jacob’s father, choking back tears at the scene of the accident on Saturday. “The accident as you all may know happened about 50 feet down the road here. My son was coming to the YMCA to swim. The fact that he couldn’t get there safely is unacceptable,” Cassell said.

The driver of the car spent time with the Cassell family following the accident, according to Steve, who said that the driver didn’t have any time to respond when Jake fell from his bicycle into the road.

“There was zero margin for error. His life has been destroyed, he’s hurting like we’re hurting so the collateral damage from this accident is just unbelievable,” Cassell said.

Delnora Erickson, who attended the memorial to Jacob on Old Georgetown Road with her son Max, 6, believes that there’s not enough protection for those who move to the area for the ease of getting around without driving.

“Our children ride their bikes regularly on these streets going to Bethesda Elementary, going to the library from our neighborhood,” Erickson said. “We love our walkable, bikeable community in terms of location but the streets just continue to be more geared toward people driving cars rather than the people who need to walk and live and go to school in the area.”

She was saddened by Jacob’s story and said that something needs to be done so that her kids and other children are protected and that this type of tragedy doesn’t happen again.

“I think we need to have protected bike lanes more so than we have now,” Erickson said. “Max loves riding his bike and loves spending time with his family and this could be our family in a few years. We give our kids increasing amounts of responsibility as they’re getting older and I could very much pictures us in a few years trusting them to ride their bikes to the pool but we’re also putting trust in our elected officials and in our community to keep us safe,” she said.

Jacob’s father called on local officials urging them to step up and make changes before there’s another incident.

“This is supposed to be a progressive county of forward thinking people but for the last 30, 40, 50 years the county executive and the county council and the Department of Transportation have neglected the most obvious responsibility which is taking care of its citizens and the fact that our son had to die after other people had already died is shameful and it’s unacceptable and there should not be ever another casualty,” Cassell said.

Del. Marc Korman (D-Montgomery County) was at the rally on Old Georgetown Road on Saturday and stated that they are working on making the roads in the area safer in the future.

“I just wish we didn’t have to do these things anymore and we’re trying to put policies in place that will make it so that we’re not only responding to incidents like this but preventing incidents from happening like this in the first place and I know that we all feel that way,” Del. Korman said.

The event was organized by the Washington Area Bicyclist Association and the Action Committee for Transit and was attended by dozens of community members and several local officials who pitched in with their thoughts and condolences.

“Thank you all for being here and I want to encourage you not to just show up today but continue to be involved to make sure that we don’t have to have any more of these ceremonies,” said Del. Sara Love (D-Montgomery).

The event was organized by the Washington Area Bicyclist Association and the Action Committee for Transit.