Little Falls Parkway would remain a two-lane road permanently at the Capital Crescent Trail crossing in Bethesda, if a new plan to boost safety in the area is approved by the Montgomery County Planning Board this week.
Listen now to WTOP News WTOP.com | Alexa | Google Home | WTOP App | 103.5 FM

Little Falls Parkway would remain a two-lane road permanently at the Capital Crescent Trail crossing in Bethesda, Maryland, if a new plan to boost safety in the area is approved by the Montgomery County Planning Board this week.

The road was temporarily narrowed from four lanes to two at the intersection after 81-year-old Ned Gaylin of Chevy Chase was killed there while riding his bike back in 2016. In the two years since the change, there have only been three pedestrian or cyclist crashes, down from six in the two years prior.

The staff recommendation that the board will take up at its Thursday meeting also includes raising the crosswalk and improving lighting in the area.

The plan could also mean changes for the Bethesda Pool. It would turn the pool’s Little Falls exit into a maintenance driveway, limiting the number of cars leaving the parking lot and turning right, directly into the trail’s crossing. A traffic analysis showed this was a main source of congestion.

The changes would cost about $1.4 million.

One of the options that garnered a lot of support during the planning process was the possibility of a pedestrian bridge over Little Falls, which would allow both trail and road traffic to continue independent of one another. But planning board documents show it would have significant environmental impact, not to mention cost. The bridge would have cost around $6 million to build, and cost another $50,000 every year to maintain.

But the plan does call for a new analysis five years after the project is completed to see if traffic and safety issues have been resolved. If not, the recommendation leaves the possibility of building the bridge open.

While there was widespread support to keep the so-called “road diet” in place, many homeowners in the area wanted Little Falls to eventually reopen to four lanes, citing traffic concerns. An analysis shows that so far, the impact on traffic has been minimal. 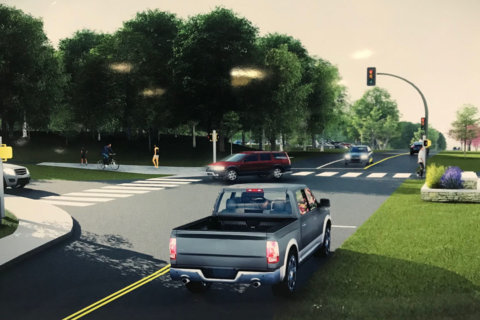