Soccer fans gathered at the Wheaton Sports Pavilion in Montgomery County to cheer as Team USA took on Chile in another Women’s World Cup soccer match.

There was no question who two members of the Washington Spirit wanted to win: Team USA.

Sammy Jo Prudhomme and Tiffany McCarty of the Washington Spirit were on hand signing autographs, greeting fans and celebrating two of their teammates, Rose Lavelle and Mallory Pugh, who are part of the U.S. Women’s World Cup team.

Prudhomme tells WTOP they want to set a tone for women’s sports, “where it’s approachable,” she said.

They also want local folks to get to know the team.

“We also want to get recognition building for the [National Women’s Soccer League],” Prudhomme said. That’s the highest level of play for soccer in the country. 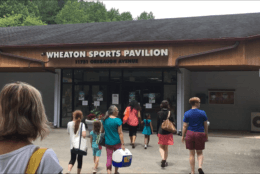 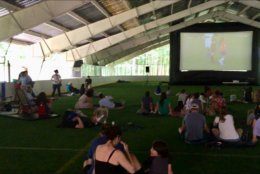 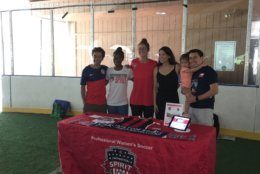 McCarty tells WTOP representation is everything for the next generation of women’s soccer players.

“Growing up, I certainly didn’t get to encounter a woman’s professional soccer player. Just to see that something is possible, having someone there and seeing that there’s a goal that can be reached is something that’s really important.”

At Sunday’s event, there were lots of children enjoying the atmosphere, including Lauren Shern’s daughter.

The indoor field at the Wheaton Sports Pavilion was speckled with blankets, coolers and mostly adult eyes fixed on the Jumbotron, with intermittent cheers when Team USA scored goals.

“Last year we did an event for the men’s World Cup … so we definitely wanted to do something for the Women’s World Cup,” said Jordan Gray of Montgomery Parks.

In the end, people on the pitch were elated when the Team USA defeated Chile 3-0. 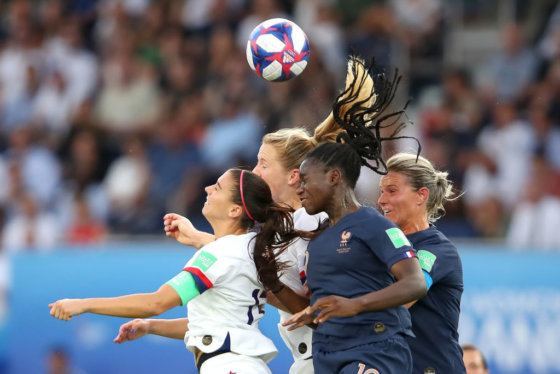 Here are photos of the U.S. Women’s National Team during the 2019 FIFA Women’s World Cup in France.