"I have dreams of representing the U.S. for the 2024 Olympic Games," said Honor Johnson. She is ranked No. 1 in the U.S. in the cadet women's sabre under-17 age group. See photos and video of how she competed in Poland.

A Bethesda, Maryland, teen who dreams of competing in the Olympics is showing promise while honing her sabre skills against international competitors.

Fifteen-year-old Honor Johnson has returned from the 2019 Junior and Cadet World Fencing Championships in Toruń, Poland, with a bronze medal.

“To be honest, I didn’t really expect a medal,” Johnson said. “It was — just amazing.”

Johnson is ranked No. 1 in the U.S. in the cadet women’s sabre under 17 age group.

“Fencing is very physical, and it’s also very mental,” Johnson said, likening the sport to physical chess. “You have to strategize and figure out what action you should be doing at the right time.”

A freshman at National Cathedral School, Johnson trains three to four hours a day, five days a week, to compete in a nearly year-round sport that only takes a break in late July and early August. 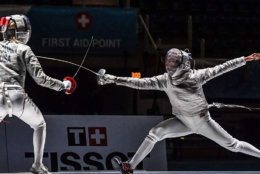 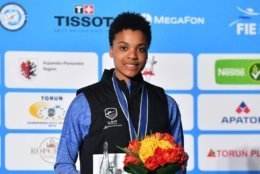 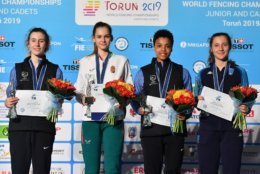 Her grueling schedule doesn’t leave room for other extracurricular activities, but Johnson wants to continue fencing in college, where she expects to study business, economics or statistics.

“I want to do business, and pursue (it) to be an entrepreneur,” Johnson said. “I would like to start my own fencing club.”

Johnson has traveled the world for competitions in countries such as Russia, Poland, Austria, Germany, Italy, Bulgaria, Hungary and Spain while accompanied by her mother.

“It’s been truly a fantastic sport for her; it’s definitely part of her and part of our family, and a great tool, a vehicle, to develop who she is as an individual, not just as an athlete,” said Honor’s mother, Sharon Rogers. Her other children are 18 and 11 years old.

Rogers credits her daughter’s personal development of life skills through fencing with her coach’s teaching style. She said Dariusz Gilman, at the Capital Fencing Academy in Rockville, doesn’t just focus on winning or working to get a gold medal but stresses the value of committing to something and striving to be your best.

“Learning how to lose gracefully and win gracefully, learning how to stay motivated and to be resilient. All of these are skills (for Johnson) that are coming out of fencing,” Rogers said.

Listening to Johnson describe how she got into the sport might serve to inspire others who have yet to find their calling.

“I started fencing because I tried so many other sports, and I either wasn’t good at them or I didn’t enjoy them,” Johnson said. But now, she added, “I have dreams of representing the U.S. for the 2024 Olympic Games.”