At first glance, it may seem perfectly understandable why Col. E Brooke Lee has a middle school named after him. But a closer look reveals a more complicated past.
Listen now to WTOP News WTOP.com | Alexa | Google Home | WTOP App | 103.5 FM

WASHINGTON — A Montgomery County Council member is asking the school system to change the name of a Silver Spring, Maryland, middle school.

At first glance, it may seem perfectly understandable why Col. E Brooke Lee — who died in 1984 at the age of 91 — has a middle school named after him. He had family members who signed the Declaration of Independence. Some served in both Congress and the Maryland State House.

Lee himself served as House Speaker in Annapolis from 1927 to 1930. He helped form what became the Washington Suburban Sanitary Commission and was a developer who shaped the county’s zoning and land use policies.

And that’s where the issue lies: Those policies barred African-Americans from living in Silver Spring — unless they were domestic servants. Montgomery County didn’t enact fair housing policies until 1968 — two years after Col. E Brooke Lee Middle School opened its doors.

Navarro said because the school is now majority-minority — 60 percent of the students are Hispanic, while 25 percent are African-American — it’s time to change the name. Navarro notes the school is due for renovation.

“It’s a good time to rename the school after somebody that would best reflect the student population, as well as the values that we hold dear in the county,” she said/

The school system has a process for naming schools, which gives “strong preference” to naming schools for women and members of minority groups “so that these groups are equitably represented among county school facilities.”

It’s more than a name change, said Navarro. The county is at a stage where it’s reassessing how policies of the past helped contribute to social and economic disparities that still exist.

“We should be making sure that our decisions are made taking into consideration whether we are exacerbating or whether we are eliminating those disparities,” Navarro said. 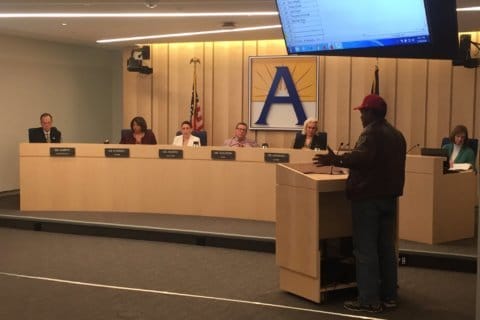