A woman reported her car stolen at gunpoint near the Wheaton Mall on Monday. The suspects were found about 15 minutes later with a replica handgun.

WASHINGTON — Police in Montgomery county arrested a pair of suspects on Monday afternoon after receiving a report of an armed carjacking near Wheaton Mall.

It happened on the 11100 block of Veirs Mill Road. The victim told police the suspects showed her a gun and took her car at about 3:30 pm.

She provided a description of the suspects and her car, and 15 minutes later, police spotted the car in Fairland, Maryland, about eight miles away.

The suspects were stopped without incident, and police found a replica handgun in their possession.

Police are working on the case and the suspects will be identified after charges are filed.

Below is the area where the car was stolen and where it was recovered. 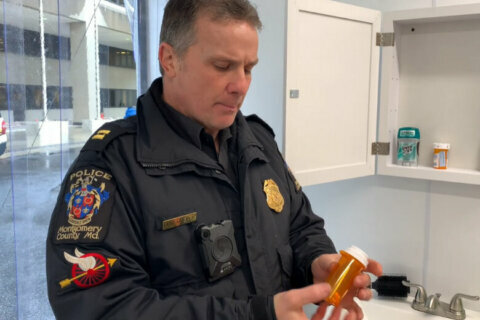 Montgomery County is taking its battle against opioids on the road