Fire dept. hopes to have fire at Clarksburg recycling plant out by Friday

Battling the large fire, which broke out about 3 a.m. Wednesday, proved challenging in part because of limited water sources at the scene. Firefighters hope to fully extinguish the fire by Friday.
Listen now to WTOP News WTOP.com | Alexa | Google Home | WTOP App | 103.5 FM

WASHINGTON — A fire at a Clarksburg, Maryland, recycling facility that closed a nearby highway for several hours Wednesday morning continues to smolder and it may be days before it’s out completely, officials in Montgomery County say.

Firefighters have contained the fire but remain at the scene of the Frederick Road recycling plant, county officials said Thursday.

Montgomery County Fire and Rescue spokeswoman Dee Howard tweeted Thursday morning that firefighters had made significant progress clearing the fire and are hoping “optimistically” to clear the scene within the next day.

Earlier this week, a fire department spokesman estimated the fire caused about $4 million in damage. No one was injured.

The large fire, which broke out about 3 a.m. Wednesday, closed Route 355 for about nine hours Wednesday morning in part because of limited water sources at the scene to battle the blaze.

Officials had to dispatch a “water supply task force” and 75 firefighters to haul in pools of water because there were no fire hydrants near the scene of the fire, Montgomery County Fire Batallion Chief Daniel Ogren said. 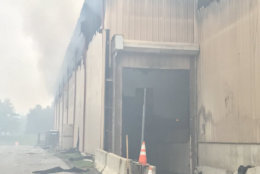 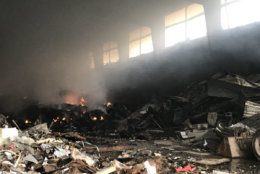 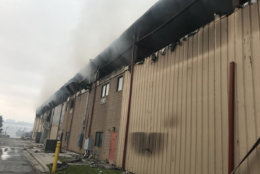 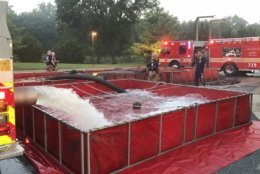 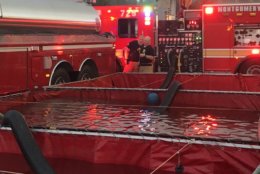 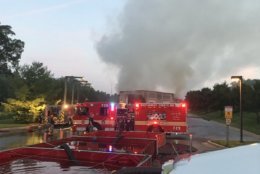 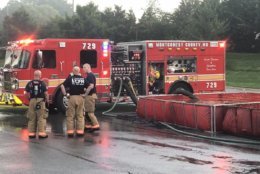 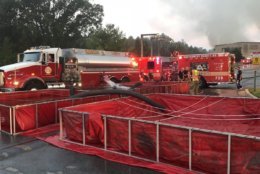 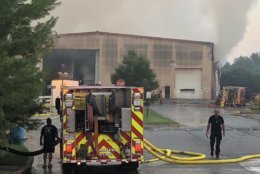 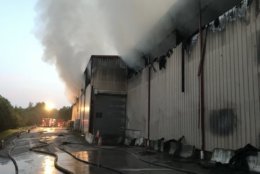 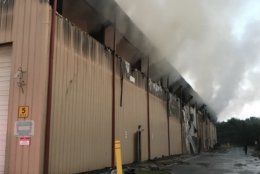 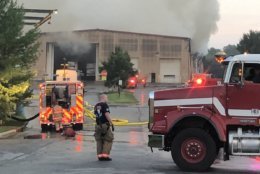 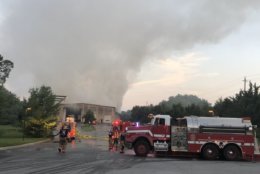 “It makes it much more difficult to fight a fire — especially a fire of this size — without having municipal water to rely on,” said Ogren. “It becomes a logistical nightmare to get all the water you need.”

Access to the building also added to the difficulty of fighting the Wednesday morning fire.

“Because of the instability of the structure, they can’t go [inside]. So they have to use exterior techniques to fight the fire,” Ogren said. “They will be here for a number of hours until we can … completely extinguish the fire.”

The building is a recycling facility for construction equipment such as shingles and wood. There was about 100 tons of trash on the floor, Piringer said.

Officials are still investigating what caused the fire. Ogren said outside surveillance videos from adjacent buildings may indicate what could have started the fire.

Below is a map of the area of the fire: