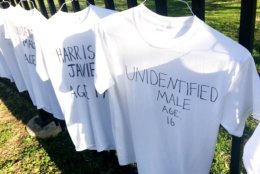 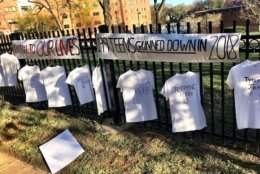 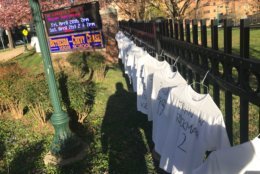 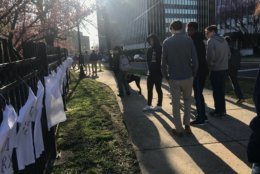 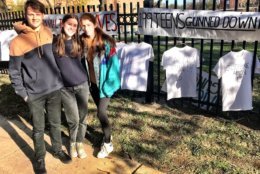 BETHESDA, Md. — Almost 200 white T-shirts hanging on a high school fence, each inscribed in magic marker with the name of a teenage victim of recent gun violence, was a striking image for commuters, Friday.

“They memorialize the 199 teenage victims of gun violence in just 2018 alone, said Bethesda-Chevy Chase High School student Emily Schrader, who organized the art installation, which was visible to drivers on busy East-West Highway.

On each shirt is the name of a student and the student’s age when they were killed.

Nearby, on the front path to the school, 12 orange shirts on wooden stakes are inscribed with the name of the 12 students killed in the Columbine school shooting, which took place 19 years ago, on April 20, 1999 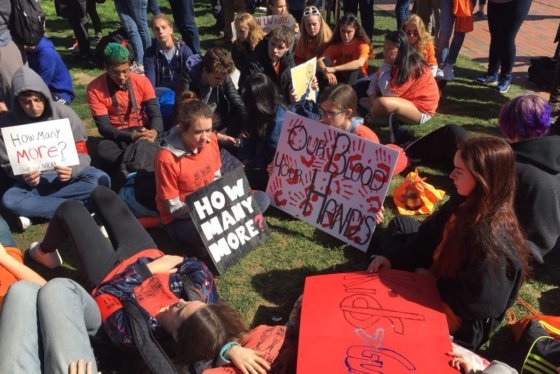 19 years after Columbine, local students walk out for gun control

Marking 19 years since the massacre at Columbine High School that killed 13 people, local students are participating in a walkout protest on Friday to call for gun control. See photos.

“We’re all working for common-sense gun legislation, but we didn’t want to forget the everyday violence that is prevalent throughout communities and our schools,” Schrader said, standing on the sidewalk in front of the large high school.

The memorial comes the same day students gathered in front of the White House for a rally and march to the Capitol, calling for strengthened gun laws.

“When Columbine happened, it was the first event like that, and people thought it was going to be the last,” Schrader said. “And that didn’t happen.”

At 17, Schrader has never known a pre-Columbine world.

“I think the first shooting that really affected me was the Sandy Hook massacre (in 2012),” she said. “I remember my parents came up to me and said something terrible happened. They explained it, and I could not fathom why someone would shoot kids at school.”

In the wake of Sandy Hook, Schrader said she and her classmates have always lived with the specter of school shootings.

“They were in first grade, so young, and so close to my age. I think it really affected the way I see violence. It made it seem even more real for me.”