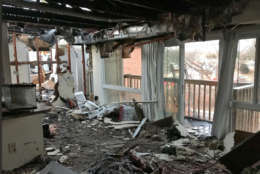 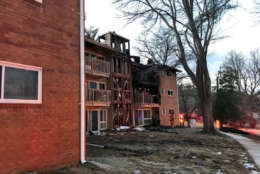 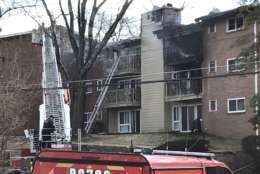 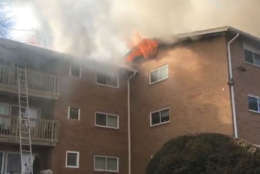 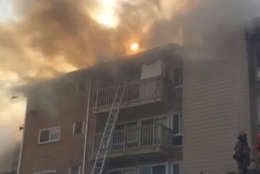 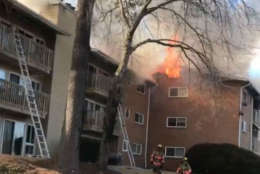 ROCKVILLE, Md. — About two dozen families are displaced after a three-alarm apartment fire in Rockville Friday afternoon was made worse by strong, wintry winds.

Montgomery County firefighters were called around 1:30 p.m. to the garden-style Fireside Park Apartments in the 700 block of Monroe Street.

They found heavy fire on the second and third floors of a three-story apartment building.

It didn’t take long for brisk winds to help spread the fire to two other buildings in the complex.

“They have a common attic, and once the fire got up into the attic of the first building, it spread one building to the next to the next, so that was quite challenging,” spokesman Pete Piringer said.

The fire likely started on balcony and spread vertically to the attic or roof, he said. The damage is estimated at $2 million.

The fire’s advance triggered a third alarm and a response by more than 100 firefighters, who fought the fire in frigid temperatures in the teens.

Piringer says crews went door-to-door to ensure that everyone in the burning buildings was evacuated, and it took 30 to 40 minutes to knock down the bulk of the fire

No residents were injured but one firefighter was hurt. Several pets were rescued, including dogs, cats, a hedgehog, a Guinea pig and fish.

Montgomery County and the American Red Cross opened an overnight shelter for affected residents at Richard Montgomery High School. They urge those who need a place to stay to check in at the high school.