WASHINGTON — A huge project to move the Marriott International headquarters to downtown Bethesda, Maryland, took a step in the right direction Thursday as it received approval from the Montgomery County Planning Board.

Its new site is planned for the area at Wisconsin and Norfolk avenues by the Bethesda Metro station.

The company is currently headquartered on Fernwood Road in Bethesda, near the intersection of Interstate 270 and the Capital Beltway.

“We do think this is a positive improvement to downtown Bethesda,” Robert Kronenberg, a division chief for the county’s planning department, told the board. “We think it’s a great project.”

Marriott, the largest hotel company in the world, said it would move its 3,500 employees to the new location by July 2022.

Developers hope to break ground sometime next year on the $600 million project, which includes an office building and a hotel.

“We’ve got the Marriott corporation coming to downtown Bethesda. It’s what everybody dreamed of,” said Norman Dreyfuss, a member of the planning board.

Amanda Farber, a leader with the East Bethesda Citizens Association, told the board that some in the area have concerns about traffic flow, but she stressed that residents overall are looking forward to the move.

“We really do want to welcome Marriott to the neighborhood,” she said.

Marriott first announced it would be staying in Bethesda in 2016 after Maryland and Montgomery County offered the company a $60 million incentive package to stick around.

“After a comprehensive review of many excellent options in Washington, D.C., as well as Arlington and Fairfax counties in Northern Virginia, and North Bethesda, we have narrowed our search to downtown Bethesda, an area which offers multiple sites that meet our priority needs,” said Marriott CEO Arne Sorenson following the announcement.

“Our goal is to provide a cutting-edge work space for our associates that offers state-of-the-art technology, modern amenities, and access to a range of transportation options.” 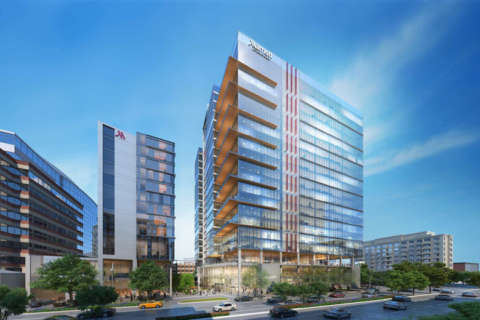