The teen shot aboard a Red Line Metro train Sunday afternoon is the half-brother of the shooter and was not the intended target, Metro Transit police said Monday.
Listen now to WTOP News WTOP.com | Alexa | Google Home | WTOP App | 103.5 FM

WASHINGTON  — The teen shot during a fight on a Red Line Metro train Sunday afternoon is the half-brother of the shooter and was not the intended target, Metro Transit police said Monday.

Metro police said Brown unintentionally shot his 14-year-old half-brother during an “affray” on the rail car involving three other people as the train approached the Takoma station shortly before 3 p.m. Sunday.

Brown has been charged in Montgomery County with first-degree assault.

Police now said they’re seeking to identify three other people involved in the altercation on the rail car before the shooting.

The altercation aboard the train was captured by digital video cameras. Police said the video shows Brown pulling out a gun and firing multiple times. One round struck his half-brother and two other bullets struck the rail car.

“Fortunately all of this was captured via the cameras on board the rail car, so that really gave us a clear picture of what happened,” Metro spokesman Dan Stessel told WTOP.

Brown’s half-brother was taken to the hospital with a gunshot wound to the abdomen. He remains in stable condition, police said.

The three other people involved in the altercation got off the train at the Takoma station, crossed the platform and boarded a train going in the opposite direction. The three people exited the Metro system at the Silver Spring station a short time later, authorities said.

Stessel said there were other people on board the rail car who “stayed at the scene and provided critical information to police in the minutes after the shooting occurred.”

Metro police are working to identify and locate the three other people involved in the fight. Anyone with information should call the MTPD Criminal Investigations Division at 301-955-5000 or text MyMTPD (696873), police said. 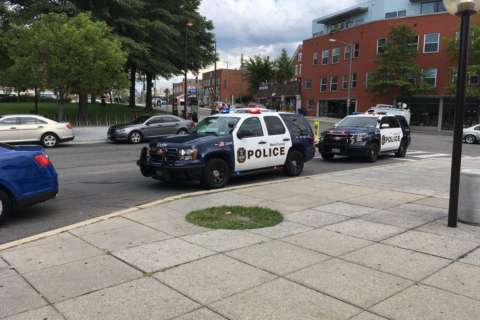 1 in custody in shooting on Red Line train