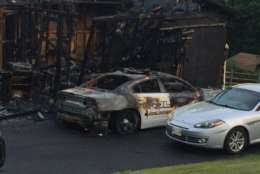 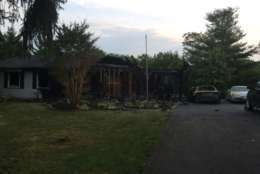 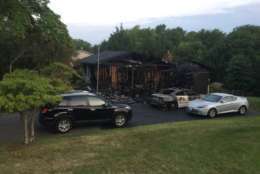 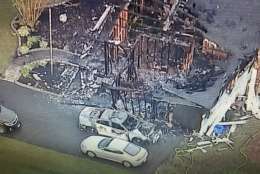 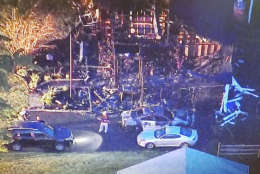 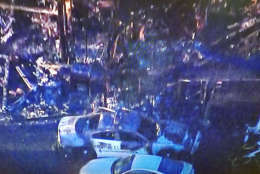 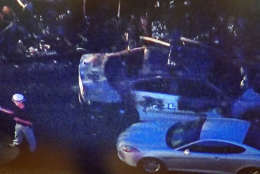 DAMASCUS, Md. — A home went up in flames along with a Montgomery County police cruiser in the early morning hours Friday, leading to heavy damage and loud explosions in a normally quiet, rural Damascus neighborhood.

The fire, west of Ridge Road, broke out on Haney Avenue before 3 a.m., spreading through the home and a vehicle which was parked directly next to it.

“The vehicle was a police cruiser, and there was ammunition in the vehicle affected by the fire,” explained Battalion Chief Dan Ogren with Montgomery County’s fire department. “Explosions were heard from the vehicle.”

There were no injuries due to the explosions, but two people, including a police officer who lived in the home, were taken to the hospital for smoke inhalation.

Later Friday morning, when the sun came up, the severity of the damage could clearly be seen.

Parts of the home had been reduced to pieces of charred wood and the police car appeared to be partially melted.

Both the home and the cruiser were destroyed, and the cause of the fire is still under investigation, but officials say the blaze started outside the home.

“It will take some time as the damage was significant,” Ogren said.

Worried neighbors heard explosions, witnessed tall flames and were awoken by the blaring sound of fire engines in the middle of the night.

“The entire front side of the house was engulfed in flames,” said Jim Daly, who lives across the street. “Any kind of residential fire in the middle of the night is always cause for concern. And with any kind of car fire, you’re worried about gasoline and the fire reaching the tires of the vehicle and exploding. Thankfully, in this case, all the residents got out with just minor injuries.”

Another neighbor said the people who lived in the house are “very nice” and had only been living there for about a year.