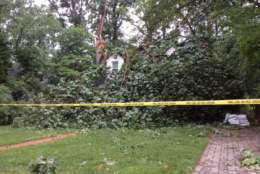 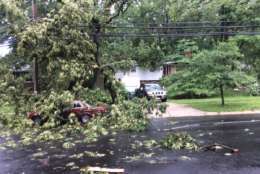 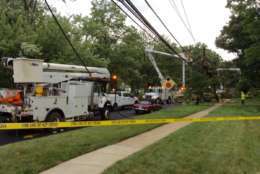 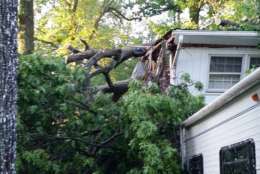 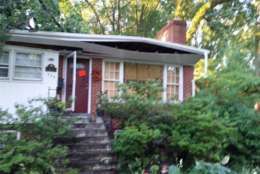 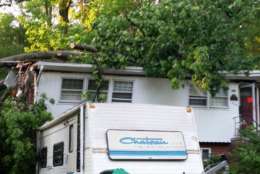 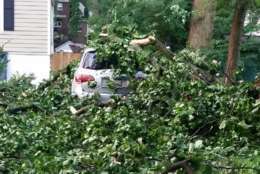 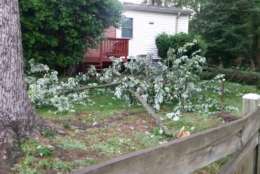 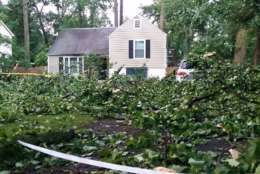 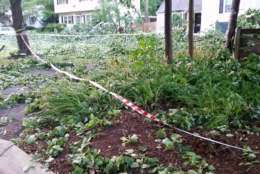 WASHINGTON — Cleanup was underway in the Northwood Park neighborhood of Silver Spring, Maryland, after an EF-0 tornado that touched down Monday afternoon left a number of people displaced and caused considerable damage in its wake. 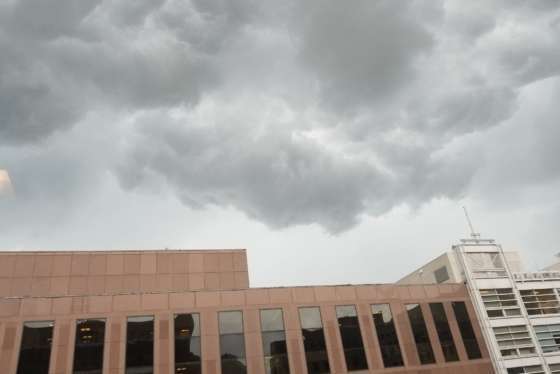 At least two homes are completely totaled, according to officials. One home is on Dennis Avenue and the other on Northwood Avenue.

Honesta Romberger, who lives next door to the Northwood Avenue home, likened the massive branches that fell on the home to a drapery that made the residence difficult to see.

“It’s covered in branches and it looks like a tree is growing over the house,” she said.

The owners of the totaled house told Romberger that the top story of the home has been destroyed, and the house itself might need to be rebuilt because the foundation may have shifted.  But Romberger said the owners are very thankful that their two young daughters, who had been in the home just before it was damaged, were not hurt.

Judy Grunst, another neighbor, has lived in the Silver Spring neighborhood for about 12 years.

“And I’m from Ohio and I have been in tornadoes.”  But she said, “It was blowing so bad.”  That’s when she heard the massive tree branches slam into the home.  “It was awful, really awful.”

Grunst said the parents in the house next door weren’t home when the tornado struck, but their two young daughters were at home with their babysitter.  Grunst said luckily, the babysitter grabbed the two girls and ran out of the house just in the nick of time — just before the home was rained down on by the massive tree branches. The babysitter and the children were not hurt.

The National Weather Service said the tornado, which had winds reaching 70 mph, was about 100 yards wide and lasted for about a minute from 3:48 p.m. to 3:49 p.m. Rated EF-0 on the Enhanced Fujita scale, the tornado blasted through Dennis Avenue, starting west of Edgewood Avenue to Eastwood Avenue.

“It looks like pretty significant damage due to some large trees down in this area,” Montgomery County Fire and Rescue spokesman Pete Pringer told WTOP. Units arriving at the scene Monday afternoon faced live wires as well as downed trees, he said.

Two residents were taken to the hospital Monday with injuries that were not life-threatening.

“Their house is totaled — that family will be displaced,” Pringer said.

Most of the residential damage hit houses within a three-block area that included Northwood, Dennis, Edgewood and Woodridge avenues, authorities said.

Tens of thousands of customers were without power in the greater D.C. area Monday, with several thousand outages reported in Maryland, at least 25,000 outages in Northern Virginia and 1,400-plus in the District.

Below is a map of the area hit by the tornado.