Detectives in Montgomery County, Maryland, are investigating the shooting deaths of two Germantown students. They were found dead inside a car in the Montgomery Village area on the eve of their graduation.
Listen now to WTOP News WTOP.com | Alexa | Google Home | WTOP App | 103.5 FM
(1/4) 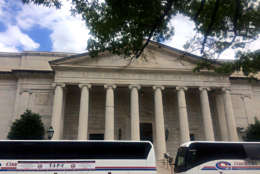 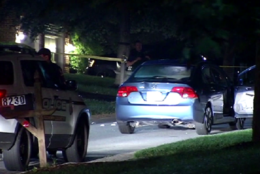 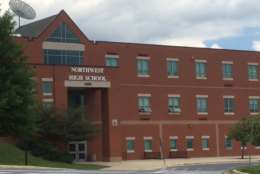 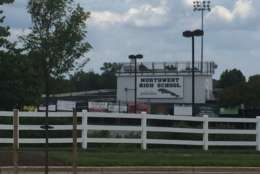 WASHINGTON — Detectives in Montgomery County, Maryland, are investigating the shooting deaths of two Germantown students. They were found dead in the Montgomery Village area Monday night on the eve of their graduation.

Police said they received a 911 call from someone who reported hearing gunshots in the 8200 block of Gallery Court in Montgomery Village, just south of East Village Avenue, around 10:45 p.m. Monday.

When officers arrived at the scene, they discovered two bodies inside a Honda Civic. Police are treating the deaths as a double homicide.

On Tuesday morning, police identified the victims as Shadi Adi Najjar, 17, of Breezedale Lane in Germantown, and Artem S. Ziberov, 18, of Flag Harbor Drive in Germantown. They were slated to don their caps and gowns Tuesday, school officials told WTOP.

Northwest High School Principal Jimmy D’Andrea addressed both deaths during graduation, as well as the death of a third student, Nigel Hendrickson, who died in January.

“We have heavy hearts,” D’Andrea said to the gathered students before asking for a moment of silence.

“I know all three of these gentlemen would want us to move forward today and celebrate,” he continued afterward. “I knew Nigel this year, and I had the honor of being Artem’s and Shadi’s principal both in middle school and again now.

“In fact, when I spoke to Artem’s mother this morning, while extremely upset, her words to me were, and I quote, ‘I hope everyone has a great celebration today.’ So let’s honor the memory of these three gentlemen by celebrating the accomplishments of this wonderful class.”

D’Andrea invited Hendrickson’s mother, Esther Hendrickson, to the stage to accept her son’s diploma on his behalf. He told the crowd at Constitution Hall that he would be delivering Najjar and Ziberov’s diplomas to their respective families.

The Northwest High School principal’s graduation comments come after a letter he sent to families earlier in the day.

“For those of you who knew Artem and Shadi, we ask that you remember and celebrate them. They were both excellent students who had a positive impact on those around them, and they will be greatly missed,” D’Andrea wrote.

D’Andrea also noted that there would be a support team of counselors at DAR Constitution Hall during the graduation ceremonies and at the school on Wednesday.

“It’s very sad,” said Eric Boyd, a Northwest alum and Prince George’s County middle school teacher from Silver Spring who was at Tuesday’s ceremony for his nephew. “And honestly, being a teacher, I’ve experienced some of this with my students. I know how other teachers are feeling, plus the parents. … It’s a heinous crime, honestly.”

He offered his condolences to both families and to anyone mourning the loss of Najjar and Ziberov.

“Over here, people have very easy access to guns. I lived in Europe for some time and … guns [are] very rare to see on the streets,” she told WTOP.

Artem Ziberov was an active member of Boy Scout Troop 489. His former scoutmaster, Karl Moline, told WTOP in an email that Ziberov was “an outstanding young man, always cheerful and ready to help.”

“While he was generally pretty reserved, he had a great sense of humor and enjoyed being around his fellow scouts and the Troop’s adult leaders. Troop 489’s leaders and families are all devastated by the loss of Artem, and extend our deepest sympathies to his family,” Moline wrote.