Bagels Not Bombs: Community gathers in support of Jewish school

After a Jewish school in Rockville was targeted with a bomb threat on Monday, about 100 people in the community decided not to remain silent. The Bagels Not Bombs event was designed to show "we are here for each other," one organizer said.
Listen now to WTOP News WTOP.com | Alexa | Google Home | WTOP App | 103.5 FM
(1/2) 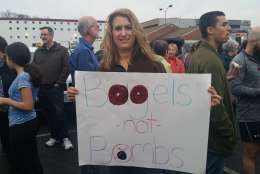 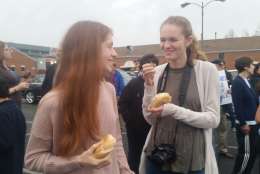 ROCKVILLE — After a Jewish school in Rockville was targeted with a bomb threat on Monday, about 100 people in the community decided not to remain silent.

They gathered Wednesday morning for an event called Bagels Not Bombs in the parking lot of the Randolph Hills Shopping Center.

The Charles E. Smith Jewish Day School on Monday received one of the numerous bomb threat robocalls made across the country that targeted Jewish centers and schools. No bombs were found.

In the parking lot, people noshed on bagels and held signs denouncing the violence, gathering in a show of solidarity.

Aviva Goldfarb organized the event along with Ester Schrader because they wanted to do something instead of feeling helpless about recent events.

“For us it’s just a way to show that we are here for each other,” Goldfarb said. “And show that we really do have a community that will not tolerate violence and hatred. We’re not just these faceless people who are going to let this kind of act go without any kind of response.”

Christiana Drapkin said that even though she is not Jewish, she came because this is her neighborhood (the event was held within walking distance of the school). “Bomb threats and any other threats are not acceptable,” she said.

Mara Greengrass lives in the community and attended the school when she was younger. She said in disbelief, “These are our neighbors that were threatened.”

Goldfarb said, “The idea that kids have to evacuate, even preschool children, during the day because of threats of violence against Jewish organizations is heartbreaking. We’re not going to stand for that.”

Montgomery County Council President Roger Berliner, who attended the event, said he met with Montgomery County Police Chief Tom Manger on Tuesday, who assured him that his police department is investigating the case along with help from the FBI.

“My understanding is that this was a robocall that went throughout the country,” Berliner said.