Lawyers argue Md. mom who killed children in exorcism was not sane

Lawyers for the mother of two young children killed during an exorcism presented witness after witness to describe Zakieya Avery's long history with mental illness in order to convince a judge that she was not criminally responsible for the fatal stabbing of the children.
Listen now to WTOP News WTOP.com | Alexa | Google Home | WTOP App | 103.5 FM

ROCKVILLE. Md. — One day after a Germantown mother pleaded guilty to the murder of her two youngest children during an exorcism, a Montgomery County judge said he would rule later this week whether she was criminally insane during the 2014 fatal stabbing.

After hearing closing arguments on Tuesday, Circuit Court judge Terrence McGann said he would “go through the voluminous record” and announce his ruling at a hearing set for Thursday morning.

On Monday, McGann described Zakieya Avery’s actions with housemate Monifa Sanford in the town house they shared with Avery’s four children as “gruesome and chilling.”

Shefferman recounted testimony of a Montgomery County crisis counselor, who was a neighbor of Avery and Sanford.

On the night of the murders, Pablo Rubio told a 911 operator that Avery seemed to be “responding to internal stimuli,” and holding a conversation with herself.

“People who respond to internal stimuli are showing symptoms of psychoses,” said Shefferman.

Shefferman described other episodes of irrational behavior, including Avery telling several family members she was pregnant with twins, fathered by an imaginary boyfriend, even though she was no longer able to have additional children.

As part of a plea agreement with prosecutors, Avery, 31, admitted she and Sanford killed her 1-year old son and 2-year-old daughter and stabbed her two older children because the women believed demons had invaded the bodies of the children. Avery’s older children survived their wounds.

Sanford was found not criminally responsible — the Maryland equivalent of an insanity defense — and has been committed to the Clifton T. Perkins Hospital for an undetermined period of time.

In earlier testimony, Neil Blumberg, a psychiatrist retained by the defense, said Avery was under the delusional belief that the violence against her children would save them from eternal damnation.

Blumberg concluded Avery was not criminally responsible for the brutal crimes.

“She clearly at the time thought this was the proper and moral thing to do,” Blumberg testified.

In court, Shefferman played a video recording of his client, alone in an interrogation room, quietly touching her skin, seemingly intent on a task.

Blumberg told the judge it appeared Avery was talking to something that wasn’t present.

Cousin Kaliha Ebony Brooks recalled Avery spoke with her about her illnesses and witnessed her cousin apparently hearing voices.

Avery’s mother told the judge she had her daughter involuntarily committed to an institution when she was “manic and suicidal.”

Shefferman said Avery had no criminal history, and there were never any allegations of abusing her children.

In closing, Shefferman said “The only logical and possible explanation is this was a person under the effects of a serious mental disorder, who believed what she was doing was for the benefit of these children.”

If Avery is found not criminally responsible, she would likely be sent to Perkins.

Judge McGann told Avery if he determines she was aware of the criminality of the murders, she could be sentenced to four, consecutive life sentences. 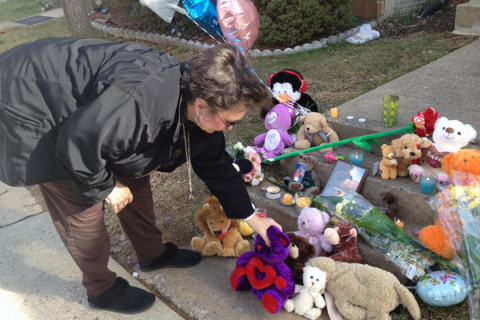