“No one has really personally said anything to me, why I am here, what they can do for me,” said resident Mariama Turay.
(1/2) 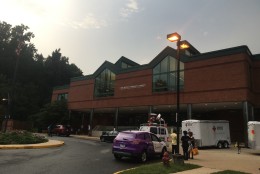 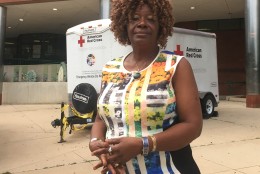 SILVER SPRING, Md. — Survivors of the Silver Spring apartment complex explosion wanted answers at a community meeting Monday night as they try to figure out what happens next.

The meeting, which was closed to the media, was held at the Long Branch Community Center, which is also serving as a shelter for many of those displaced by the deadly fire.

“No one has really personally said anything to me, why I am here, what they can do for me,” said Mariama Turay.

Turay has lived in an apartment at the Flower Branch Apartments, on Piney Branch Road, for 30 years. Her apartment is directly behind the building where the explosion took place, and she is afraid to stay there until she can be assured her building is safe.

“I am totally confused, because I am thinking about all of the people that have literally died in my face,” Turay said.

Adrian Boye lived on the third floor of the building where the blast occurred. Boye said a decision to take out the trash that night put him out of harm’s way when the explosion happened. He came to the meeting hoping to find out what help he could get.

“We’re hoping to get answers, getting relocated, something,” Boye said.

Investigators are still trying to determine the cause of the explosion, which left at least six people dead in the most recent count.

Boye said that in the days before the blast, he smelled gas in the building and reported it to building management. Then, on July 25, he said he called 911 about the odor.

He doesn’t feel like anyone took the complaint seriously. “That’s the most frustrating part, because all this could have been avoided,” Boye said.

Residents were told that legal assistance and case managers would be available to work with them on Tuesday, Boye said. For now, he is staying with friends while he tries to figure out his next steps.