Cycling advocates are pushing for added safety measures at a Montgomery County, Maryland intersection where two cyclists were killed within months of each other.
Listen now to WTOP News WTOP.com | Alexa | Google Home | WTOP App | 103.5 FM

WASHINGTON — Cycling advocates are pushing for added safety measures at a Montgomery County, Maryland intersection where two cyclists were killed within months of each other.

As a result, Bike Maryland, an advocacy group for cyclists, is petitioning the Maryland State Highway Administration to install a pedestrian-activated red light known as a “HAWK” light at the intersection.

“The State Highway Administration needs to act swiftly to ensure that cyclists and pedestrians can safely cross this intersection,” Lamphier said in an email to WTOP. “Bike Maryland will work with our elected officials to make our state highways safe for all users.”

According to Buck, each state has a Manual of Uniform Traffic Control Devices. He said that the last time Maryland’s manual was approved, there were concerns about the safety of the HAWK lights, specifically that the timing of the flashing red lights might not enable a pedestrian to get completely across a given intersection.

Buck said that since the deaths of Osorio and Towers, added signage and a warning beacon were placed at the crosswalk, where cyclists are urged to dismount before crossing the road.

Bike Maryland is not alone in pressing for a different approach to safety at the crosswalk. The Aspen Hill Civic Association has written to the state about safety concerns.

The letter, which was signed by all nine council members, claimed that Maryland law protected pedestrians in crosswalks but failed to give the same consideration to people in wheelchairs or on bikes.

The council advised it was working with the county state delegation to Annapolis to amend the law. A similar letter was sent by the council following Towers’ death. 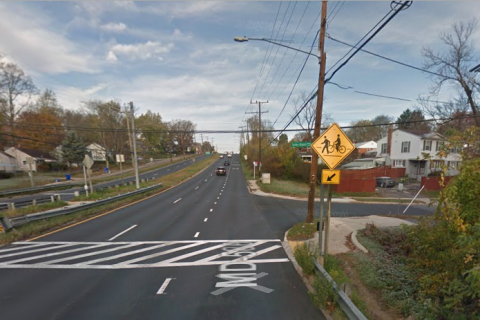