A brother and sister team are producing a documentary as part of “The Quince Orchard Project,” an effort to capture the history of Montgomery County’s African American community in the Gaithersburg area.
Listen now to WTOP News WTOP.com | Alexa | Google Home | WTOP App | 103.5 FM
(1/3) 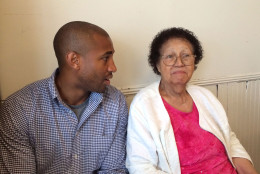 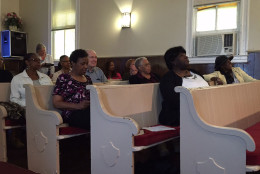 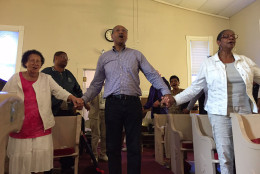 GAITHERSBURG, Md. — Every day, hundreds of people drive past it, unaware of its history. For many, the old church along Route 28 in Gaithersburg is just “the church with the missing steeple.”

That distinctive white church “without the steeple” is the Pleasant View Methodist Episcopal Church, part of a historic parcel that dates back to the founding of the Quince Orchard community back in 1868 when a group of African American residents planned and built a school for their children.

Jason Green, a descendant of those first families, once wondered why they risked building a school. He thought it might have been easier, and safer, for them to hire a tutor. After all, the Civil War had just recently ended.

“That’s when my grandmother stopped me … stopped me in my tracks. And she said the black children of the community needed a school,” Green said.

She told him his great-great-grandfather and his neighbors saw that need and had the school built. He recalls his grandmother, Pearl Green, told him, “They were doers — and doers do.”

Green is carrying on that tradition. He and his sister, Dr. Kisha Davis, are producing a documentary as part of “The Quince Orchard Project,” an effort to capture the history of Montgomery County’s African American community in the Gaithersburg area. The documentary will focus on a period 100 years after the founding of Quince Orchard.

“The documentary is actually focused on how the people of the Quince Orchard community made a difficult decision in one of America’s most turbulent times,” Green said.

He explains that in 1968, in what Green calls the shadow of the assassination of Martin Luther King Jr., three previously segregated churches — two white, one African-American — decided to merge.

“Our documentary focuses on who those people were and how they were able to make that difficult decision … and we draw lessons that we then try to apply to what’s been a racially challenged over the last few years,” Green said.

The Quince Orchard Project isn’t just the making of a documentary. Green is also involved in working alongside the Pleasant View Historic Association to preserve the 3-acre parcel.

Preserve Maryland recently added it to their “Six-to-Fix,” a designation intended to help six threatened sites navigate the preservation process.