TORONTO (AP) — The Blue Jays made a triumphant return to Toronto after being away from home for nearly two…
Listen now to WTOP News WTOP.com | Alexa | Google Home | WTOP App | 103.5 FM

TORONTO (AP) — The Blue Jays made a triumphant return to Toronto after being away from home for nearly two years.

“It felt like we had our real fans,” Bichette said. “Definitely a good pickup for us. A lot of exciting things have been happening. So excited to be here.”

George Springer had three hits and an RBI in his first home game north of the border as the Blue Jays played at Rogers Centre for the first time since Sept. 29, 2019, an 8-3 win over Tampa Bay.

Kansas City lost for the second time in 10 games.

Displaced from Canada because of border restrictions resulting from the coronavirus pandemic, the Blue Jays played the bulk of the shortened 2020 season in Buffalo, New York, the home of their Triple-A affiliate. They began the 2021 regular season playing at their spring training home in Dunedin, Florida, before moving back to Buffalo in June.

On July 16, the Canadian federal government granted the Blue Jays an exemption to the ongoing border restrictions, allowing the team to return home.

“We’ve kind of been trying to pretend like we had a home,” Bichette said. It’s difficult to do for two years so when we finally come back here, it definitely feels like a big weight off our shoulders. Just super excited to be here.”

A vocal crowd of 13,446 sounded more like 50,000 while chanting “Let’s go Blue Jays” as the players ran in from center field before the game, passing through lines of flag-waving healthcare workers. Fans stood and cheered as closer Jordan Romano faced Jarrod Dyson for the final out, and roared in approval when third baseman Santiago Espinal ended the game with a running barehanded catch in short left.

The homecoming was made even sweeter after the Blue Jays made a splash at Friday’s trade deadline, acquiring All-Star right-hander José Berríos from Minnesota and reliever Joakim Soria from Arizona.

The Blue Jays began the day 4 1/2 games out of the second wild-card spot, with two teams ahead of them.

“We believe we haven’t played our best baseball yet,” Blue Jays general manager Ross Atkins said in a pregame teleconference. “Hopefully those days are here upon us.”

Right-hander Ross Stripling (4-6) allowed two runs and four hits in 5 1-3 innings to snap a three-start winless streak as the Blue Jays won for the third time in four games.

“That was such a cool experience,” Stripling said. “That’ll be something that I talk about forever.”

Hernandez opened the scoring with a first-pitch homer off Royals left-hander Daniel Lynch (1-3) to begin the second, his 16th.

Kansas City’s Salvador Perez hit a solo homer in the sixth, his 26th. Perez has homered in three consecutive games.

Lynch pitched eight shutout innings to beat Detroit on Sunday for his first career win, but couldn’t match that against the Blue Jays, allowing three runs and seven hits in six innings.

“Just a really good outing for Daniel,” manager Mike Matheny said. “To see him get through that sixth was impressive. He kept us in that game.”

Stripling left after Perez’s homer. Left-hander Tim Mayza got five outs, fellow lefty Brad Hand worked one inning in his Toronto debut after being acquired from Washington on Thursday, and Jordan Romano finished for his ninth save in 10 opportunities.

Bichette scored twice and leads the majors with 81 runs.

Romano is just the second Canadian-born pitcher to record a save for the Blue Jays at Rogers Centre, joining right-hander Paul Quantrill.

The Blue Jays added Hand to the roster and optioned LHP Kirby Snead to Triple-A Buffalo. …RHP Tyler Chatwood and OF Jonathan Davis were designated for assignment to make room on the 40-man roster for Berríos and Soria.

Blue Jays RHP Alek Manoah (2-1, 2.90) will be activated off the injured list to start Saturday afternoon after missing the past 12 games because of a back contusion. Manoah last pitched July 9 at Tampa Bay. LHP Mike Minor (8-8, 5.32) starts for Kansas City. 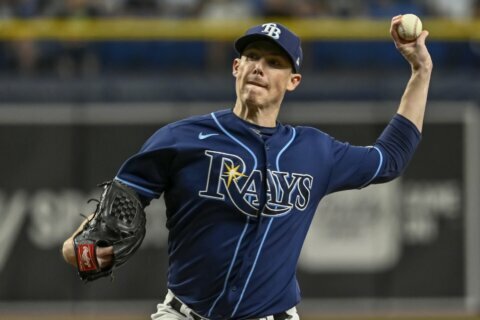 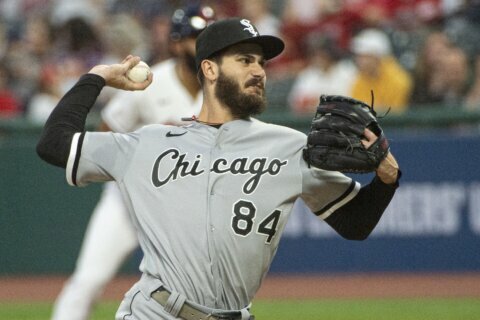 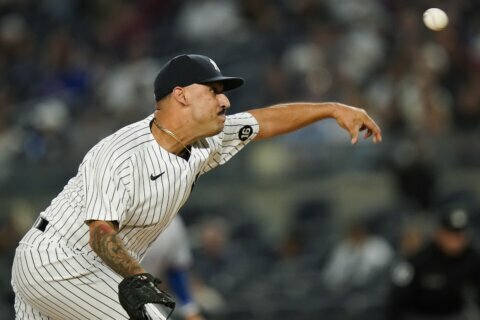