Syrians caught between regime and rebels as Idlib offensive looms

As a large-scale military campaign in Syria's last rebel stronghold looms, Syrians on both sides of the divide are bracing for a bloody battle. See video from the front lines.

(CNN) — As a large-scale military campaign in Syria’s last rebel stronghold looms, Syrians on both sides of the divide are bracing for a bloody battle.

In the rebel-held province of Idlib, millions of residents are caught between the bombs of Russian and Syrian aircraft and the militants who have blocked their departure. Outside the rebel area, Syrian soldiers and local forces are gathering at the frontiers to try to ward off potential reprisals. CNN visited the country with the permission of the Syrian government.

“We thought that the situation was getting calmer, so I was enjoying a night out on the roof when I felt a rocket fly over my head,” said Ghawi Salloum from the town of Mouhardeh, near the frontier with the rebel territory.

The rocket landed near his house and killed two of his nieces while they were running errands. Eight other people also died in the rebel attack last week.

“Just like that, a rain of rockets fell on us and we sent 10 dead bodies to church,” said Salloum.

Inside Idlib, some 3 million civilians are scrambling to find safety as Russian and Syrian vows to overrun the province grow louder. They flock to the Turkish border — closed to Syrians since 2015 — hoping that the proximity to the NATO power will offer relative respite.

In recent weeks, Syrian and Russian planes have conducted scores of airstrikes in Idlib, apparent warning shots in the run-up to the anticipated offensive. In a report Friday, Amnesty International accused the Syrian government of using outlawed cluster weapons and unguided barrel bombs in the attacks.

“The Syrian government has routinely used banned cluster munitions and barrel bombs across Syria to inflict terrible harm and suffering on civilians,” said Amnesty International’s Syria researcher Diana Semaan in Friday’s statement. “Now they have started duplicating these horrific attacks in Idlib, and we don’t have any reason to believe that they will stop.”

Families on the run

The frightened family of Layla, 15, is just one among the millions forced to flee after getting caught up in the crossfire of Syria’s brutal civil war.

“I don’t know where we’re going,” said Layla, bouncing in the back of a beat-up pickup. “It’s the first time we’ve been displaced.”

This week their remote town in rural Idlib province came under attack by Syrian government helicopters.

She and her family have now joined more than six million Syrians forced to flee villages and towns that have become battlefields since the bloody civil war broke out more than seven years ago.

Before that their town had been spared.

“It was the first time we saw bombing,” said Layla. “We’ve seen it on television and on phones, and now it’s right before our eyes.”

UN officials say that, within the past week alone, more than 30,000 people have fled the fighting in Idlib as Syrian forces, backed by Russian aircraft, prepare for a much-anticipated offensive to retake the last part of the country still under the control of an armed opposition.

Armed groups in the rebel-held province — increasingly dominated by Islamist extremists — have since early August been arresting people who promote and pursue reconciliation and surrender agreements with the Syrian regime, according to statements from members of the opposition, the armed groups themselves and an Idlib-based activist who talked to CNN on Monday.

“All opposition militant groups including Hayet Tahrir al-Sham (an al-Qaida affiliate), all the Free Syrian Army groups, the National Liberation Front, Jaish al-Izza, and others across Idlib province, took a decision that anyone who is in communication with the Syrian regime or the Russians through the Russian reconciliation centers, will be and are being arrested,” the Idlib-based activist told CNN on Monday.

He spoke on condition of anonymity for fear of retribution.

Atop a hill overlooking Idlib sat a group of local Christian forces who support the Syrian government, plains of green and brown stretching out before them.

“The entire area that’s green is ours. The barren areas are theirs,” said one volunteer with the local forces, known as the National Defense Forces, who didn’t want to be named for security reasons.

The hilltop artillery position in northwestern Hama held a cannon, weathered tanks and AK-47s. The frontier with the rebel stronghold lies just two kilometers away.

Behind the garrison sits the Christian town of Mouhardeh, where some 27,000 people have tried to remain in their houses despite frequent rocket fire from rebel forces.

Mouhardeh was the scene of last week’s rocket attack that killed Ghawi Salloum’s two nieces. Another man, Shadi Shahda, lost his children, mother and wife. Several of the town’s men have been gathering in his patio since the attack, hoping to keep him company as he grieves.

“They were beautiful children. We are grateful for the time we had with them,” he said. “But now they have been taken away forever.”

Back at the artillery position, National Defense Forces commander Simon al-Wakeel said his men have repelled rebel incursions into the village at least 20 times over the past six years. He said he wants Western countries to understand that their fight is against Islamic “extremists.”

“These are al-Qaida on the other side,” he said, referring to Hayat Tahrir al-Sham, one of the main fighting forces in Idlib and a former affiliate of al-Qaida. “These are the people who attacked America on 9/11.”

Eventually the truck carrying Layla’s family arrived at a recently setup camp on a rocky hillside near the Turkish border. They could go no further.

As Idlib braces for the government offensive, Turkey has made it clear it will not open its frontier to Syrian refugees. It already has accepted more than three million Syrians, and refuses to take more.

Layla and her mother, brothers and sister wait in the back as her father, who calls himself Abu Muhammad, aided by other recent arrivals, puts up the aluminum poles and blue and white plastic sheeting that will soon be their new home, a tent with breeze block floors.

When it was finally done, Abu Muhammad went back to the truck and lifted Layla in his arms. Disabled since birth, she can’t walk. He carried her to the tent, and gently laid her down on a rough tan blanket spread on the floor.

But for a few mattresses, a baby’s crib and two small handbags, the tent was bare. They left their home in a hurry.

“We escaped with only our lives,” Abu Muhammad said. “The UN gave us this tent, but nothing with it.” His main concern is caring for Layla. Before he and his family fled to the border area, Abu Muhammad worked repairing stoves and managed to make enough to feed and clothe his wife and six children and provide the extra care Layla needs. Not anymore.

Nonetheless, he considers himself lucky to have a roof, even if it’s a roof of plastic sheeting, over his head. “There are people sleeping under the trees, in their cars on the road,” he said.

She then turned her head and broke into tears. 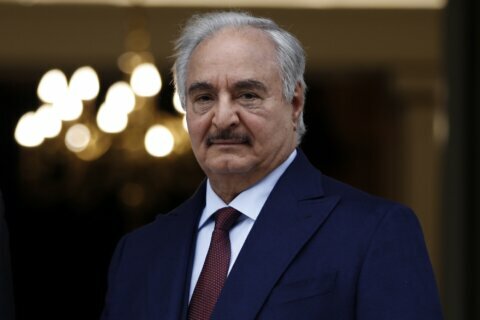 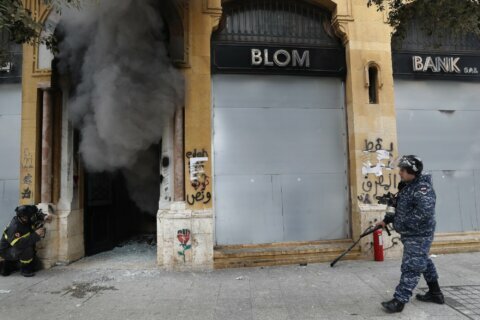 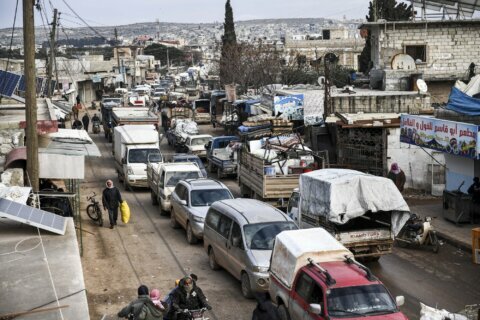