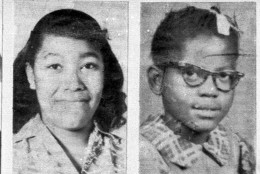 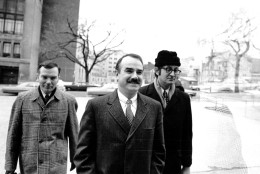 On Sept. 15, 1963, four black girls were killed when a bomb went off during Sunday services at the 16th Street Baptist Church in Birmingham, Alabama. (Three Ku Klux Klansmen were eventually convicted for their roles in the blast.)

In 1887, the city of Philadelphia launched a three-day celebration of the 100th anniversary of the Constitution of the United States.

In 1935, the Nuremberg Laws deprived German Jews of their citizenship.

In 1940, during the World War II Battle of Britain, the tide turned as the Royal Air Force inflicted heavy losses upon the Luftwaffe.

In 1950, during the Korean conflict, United Nations forces landed at Incheon in the south and began their drive toward Seoul (sohl).

In 1959, Nikita Khrushchev became the first Soviet head of state to visit the United States as he arrived at Andrews Air Force Base outside Washington.

In 1961, the United States began Operation Nougat, a series of underground nuclear explosions in the Nevada Test Site, two weeks after the Soviet Union resumed testing its nuclear weapons.

In 1972, a federal grand jury in Washington indicted seven men in connection with the Watergate break-in.

In 2001, President George W. Bush ordered U.S. troops to get ready for war and braced Americans for a long, difficult assault against terrorists to avenge the Sept. 11 attack. Beleaguered Afghans streamed out of Kabul, fearing a U.S. military strike against Taliban rulers harboring Osama bin Laden.

In 2008, on Wall Street, the Dow Jones industrial average fell 504.48, or 4.42 percent, to 10,917.51 while oil closed below $100 a barrel for the first time in six months amid upheaval in the financial industry as Lehman Brothers Holdings Inc. filed for bankruptcy protection and Merrill Lynch & Co. was sold to Bank of America.

Ten years ago: Federal Reserve Chairman Ben Bernanke said the worst recession since the 1930s was “very likely over,” although he cautioned that pain – especially for nearly 15 million unemployed Americans – would persist. An unrepentant Muntadhar al-Zeidi (MOON’-tuh-dahr ahl-zay-EE’-dee), the Iraqi reporter who’d thrown his shoes at President George W. Bush in December 2008, was freed from prison.

Five years ago: U.S. Secretary of State John Kerry, in Paris for an international meeting of diplomats, said he wouldn’t shut the door on the possibility of working with Iran against a common enemy in the Islamic State militant group, but that the two nations would not coordinate on military action. Hurricane Odile blazed a trail of destruction through Mexico’s Baja California Peninsula that leveled everything from ramshackle homes to luxury hotels and big-box stores. Two Vietnam War soldiers received the Medal of Honor from President Barack Obama in a White House ceremony, nearly 50 years after they’d thrown themselves into harm’s way to protect their brothers in combat. (Army Command Sgt. Maj. Bennie G. Adkins survived his injuries; Army Spc. Donald P. Sloat did not.)

One year ago: Emergency workers in North Carolina went door-to-door, urging people to flee the rising floodwaters from Hurricane Florence; the storm had come to a virtual standstill over land while dumping heavy rain, raising fears of disastrous flooding. A U.S. Border patrol supervisor, Juan David Ortiz, was arrested in Laredo, Texas, in the deaths of four women and an assault on a fifth woman who managed to escape. A 26-year-old Massachusetts man, Arthur Medici, was bitten by a shark in the water off a Cape Cod beach and died later at a hospital, becoming the state’s first shark attack fatality in more than 80 years.