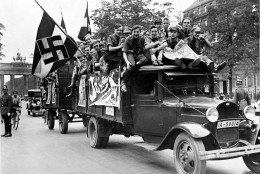 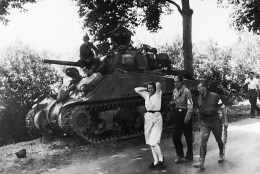 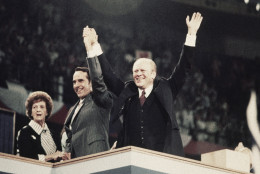 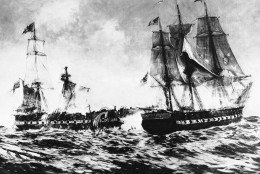 On August 19, 1934, a plebiscite in Germany approved the vesting of sole executive power in Adolf Hitler.

In 1812, the USS Constitution defeated the British frigate HMS Guerriere off Nova Scotia during the War of 1812, earning the nickname “Old Ironsides.”

In 1814, during the War of 1812, British forces landed at Benedict, Maryland, with the objective of capturing Washington D.C.

In 1848, the New York Herald reported the discovery of gold in California.

In 1909, the first automobile races were run at the just-opened Indianapolis Motor Speedway; the winner of the first event was auto engineer Louis Schwitzer, who drove a Stoddard-Dayton touring car twice around the 2.5-mile track at an average speed of 57.4 mph.

In 1942, during World War II, about 6,000 Canadian and British soldiers launched a disastrous raid against the Germans at Dieppe, France, suffering more than 50-percent casualties.

In 1980, 301 people aboard a Saudi Arabian L-1011 died as the jetliner made a fiery emergency return to the Riyadh airport.

In 1982, Soviet cosmonaut Svetlana Savitskaya became the second woman to be launched into space.

In 1987, a gun collector ran through Hungerford, England, 60 miles west of London, killing 16 people, including his mother, before turning his gun on himself.

In 1990, Leonard Bernstein conducted what turned out to be the last concert of his career at Tanglewood in Lenox, Mass. with the Boston Symphony Orchestra; the program ended with Beethoven’s Symphony No. 7.

In 2003, a suicide truck bomb struck U.N. headquarters in Baghdad, killing 22, including the top U.N. envoy, Sergio Vieira de Mello. A suicide bombing of a bus in Jerusalem killed 22 people.

Five years ago: A video released by Islamic State militants purported to show the beheading of American journalist James Foley as retribution for U.S. airstrikes in Iraq. The New York Islanders announced the team had been sold to a former Washington Capitals co-owner Jon Ledecky and London-based investor Scott Malkin.

One year ago: Former CIA Director John Brennan, whose security clearance had been revoked by President Donald Trump, told NBC’s “Meet the Press” that he was considering taking legal action to try to prevent Trump from removing clearances from other current and former officials. “Crazy Rich Asians,” in its opening weekend in American theaters, was the top money-making film.