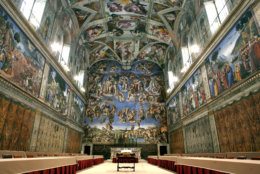 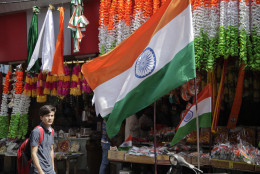 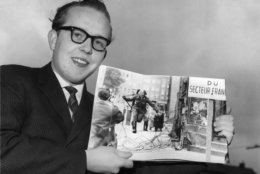 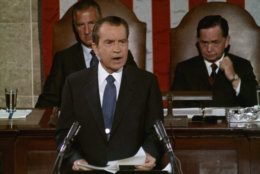 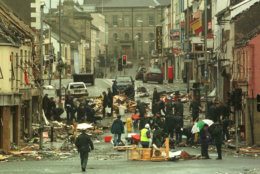 In 1483, the Sistine Chapel was consecrated by Pope Sixtus IV.

In 1888, T.E. Lawrence, the British soldier who gained fame as “Lawrence of Arabia,” was born in Tremadoc, Wales.

In 1935, humorist Will Rogers and aviator Wiley Post were killed when their airplane crashed near Point Barrow in the Alaska Territory.

In 1945, in a pre-recorded radio address, Japan’s Emperor Hirohito announced that his country had accepted terms of surrender for ending World War II.

In 1947, India became independent after some 200 years of British rule.

In 1961, as workers began constructing a Berlin Wall made of concrete, East German soldier Conrad Schumann leapt to freedom over a tangle of barbed wire in a scene captured in a famous photograph.

In 1969, the Woodstock Music and Art Fair opened in upstate New York.

In 1995, the Justice Department agreed to pay $3.1 million to white separatist Randy Weaver and his family to settle their claims over the killing of Weaver’s wife and son during a 1992 siege by federal agents at Ruby Ridge, Idaho.

In 1998, 29 people were killed by a car bomb that tore apart the center of Omagh, Northern Ireland; a splinter group calling itself the Real IRA claimed responsibility.

In 2017, President Donald Trump, who’d faced harsh criticism for initially blaming the deadly weekend violence in Charlottesville, Virginia on “many sides,” told reporters that there were “very fine people on both sides” of the confrontation and that groups protesting against the white supremacists were “also very violent.” (In between those statements, at the urging of aides, Trump had offered a more direct condemnation of white supremacists.)

Ten years ago: U.S. Sen. Jim Webb, D-Va., visiting Myanmar, was able to secure the release of John Yettaw, an American imprisoned for swimming to the home of Nobel laureate Aung San Suu Kyi. A wedding tent fire in Kuwait claimed the lives of 55 women and children.

Five years ago: Texas Gov. Rick Perry was indicted by a grand jury for allegedly abusing the powers of his office by carrying out a threat to veto funding for state prosecutors investigating public corruption. (A coercion charge was tossed on appeal before Texas’ highest criminal court voided the abuse of power charge in February 2016.)

One year ago: President Donald Trump revoked the security clearance of ex-CIA Director John Brennan in an unprecedented act of retribution against a vocal critic; Trump later told The Wall Street Journal that Brennan was among those he held responsible for the Russia investigation. In a speech blasting Trump and his “Make America Great Again” slogan, New York Gov. Andrew Cuomo said America “was never that great,” and wouldn’t be great until all Americans share true equality. (Cuomo would later say that his words had been “inartful,” and that “America has always been great.”) A suicide bomber struck a private education center in a Shiite neighborhood of the Afghan capital, killing 34 young men and women; the Islamic State group claimed responsibility.