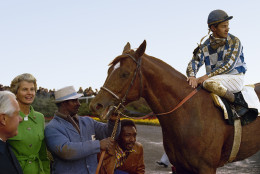 On June 9, 1954, during the Senate Army-McCarthy hearings, Army special counsel Joseph N. Welch berated Sen. Joseph R. McCarthy, R-Wis., asking: “Have you no sense of decency, sir? At long last, have you left no sense of decency?”

In 1588, construction began on the present-day Rialto Bridge in Venice, Italy, with the laying of the first stone; the structure was completed in 1591.

In 1732, James Oglethorpe received a charter from Britain’s King George II to found the colony of Georgia.

In 1940, during World War II, Norway decided to surrender to the Nazis, effective at midnight.

In 1953, 94 people died when a tornado struck Worcester (WU’-stur), Massachusetts.

In 1969, the Senate confirmed Warren Burger to be the new chief justice of the United States, succeeding Earl Warren.

In 1972, heavy rains triggered record flooding in the Black Hills of South Dakota; the resulting disaster left at least 238 people dead and $164 million in damage.

In 1978, leaders of the Church of Jesus Christ of Latter-day Saints struck down a 148-year-old policy of excluding black men from the Mormon priesthood.

In 1986, the Rogers Commission released its report on the Challenger disaster, criticizing NASA and rocket-builder Morton Thiokol for management problems leading to the explosion that claimed the lives of seven astronauts.

In 2004, the body of Ronald Reagan arrived in Washington to lie in state in the U.S. Capitol Rotunda before the 40th president’s funeral. The FCC agreed to a record $1.75 million settlement with Clear Channel to resolve indecency complaints against Howard Stern and other radio personalities.

Ten years ago: Under heavy guard, a Guantanamo Bay detainee walked into a civilian U.S. courtroom for the first time; Ahmed Ghailani, a Tanzanian accused in two American Embassy bombings in 1998, pleaded not guilty before the judge in New York. (Ghailani was convicted in 2010 of a single count of conspiring to destroy government buildings and acquitted of 280 charges that he’d taken part in the bombings; he is serving life at the United States Penitentiary in Florence, Colorado.) A bankruptcy judge approved Chrysler’s plan to terminate 789 of its dealer franchises, the same day the Supreme Court cleared the way for Chrysler LLC’s sale to Fiat.

Five years ago: In a wide-ranging review, the Veterans Affairs Department said more than 57,000 U.S. military veterans had been waiting 90 days or more for their first VA medical appointments, and an additional 64,000 appeared to have fallen through the cracks, never getting appointments after enrolling and requesting them. Five American special operations troops were killed by a U.S. airstrike called in to help them after they were ambushed by the Taliban in southern Afghanistan.

One year ago: After leaving the annual G-7 summit in Canada, President Donald Trump pulled out of a joint statement with other summit leaders, citing what he called “false statements” by the host, Canadian Prime Minister Justin Trudeau. Trudeau warned that he wouldn’t hesitate to retaliate against new U.S. tariffs. Justify, ridden by Mike Smith and trained by Bob Baffert, won the Belmont Stakes to become horse racing’s 13th Triple Crown winner and the second in the past four years. Simona Halep won her first Grand Slam trophy, beating Sloane Stephens in the women’s final at the French Open.

on this date | on this day | Today in History