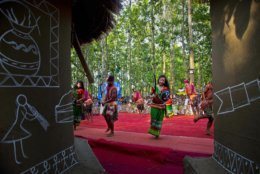 Share on Facebook. Share on Twitter. Share via email. Print.
PANTAN, India (AP) — The Rabha tribal community in India’s northeastern state of Assam celebrates the Baikho festival each year, performing traditional rituals to please a deity of wealth and ask for good rains and a good harvest.

On the first day of the weeklong rituals, people scrub their homes and belongings clean. They clear jungle lands of fallen foliage near the village where the deity is believed to live. After sunset, spiritual leaders visit each household, sing ceremonial songs and sprinkle rice on the rooftops. They are offered rice beer. Then the community gathers near the house of the head priest and sings ritual songs while drinking and dancing.

Worshipping begins the next day. A man from each household and village priests go to designated worship places in the jungles, pray and sacrifice animals. After the ceremonies, men share more cold rice beer.

After all rituals are finished, people dress up for dances and performances. Villagers from neighboring communities gather for the all-night celebrations. People play a traditional game known as rope fighting. Men and women play music, dance and sing songs.

Priests cover their bodies and faces with rice powder. They burn a “mejhi,” a wall of bamboo filled with festive food and plant debris. Fire and the beating of drums create an atmosphere and are believed to protect villages from evil spirits by energizing the air.

The flames and sounds are also seen as the source of adrenaline for holy leaders who run barefoot over hot coals. Afterward, village women wash the priests’ feet and serve them refreshments to honor their bravery.