Today in History: May 17

Here’s a look at what happened on this date in history.
(1/8) 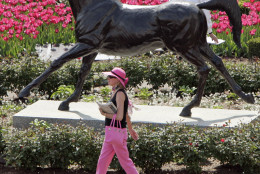 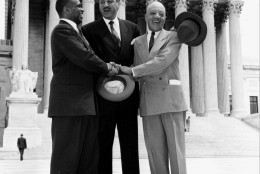 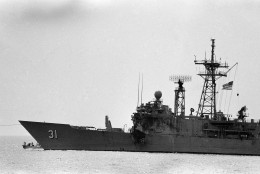 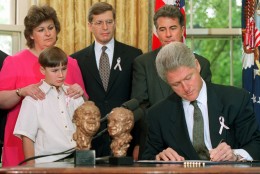 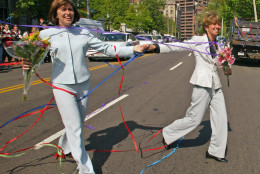 On May 17, 2004, Massachusetts became the first state to allow same-sex marriages.

In 1792, the New York Stock Exchange had its beginnings as a group of brokers met under a tree on Wall Street and signed the Buttonwood Agreement.

In 1946, President Harry S. Truman seized control of the nation’s railroads, delaying — but not preventing — a threatened strike by engineers and trainmen.

In 1954, a unanimous U.S. Supreme Court handed down its Brown v. Board of Education of Topeka decision which held that racially segregated public schools were inherently unequal, and therefore unconstitutional.

In 1968, nine men and women, including brothers Daniel and Philip Berrigan, entered the Selective Service office in Catonsville, Maryland, seized several hundred draft files and burned them outside to protest the Vietnam War before being arrested. (The “Catonsville Nine,” as they came to be known, received federal prison sentences ranging from 24 to 42 months.)

In 1973, a special committee convened by the U.S. Senate began its televised hearings into the Watergate scandal.

In 1987, 37 American sailors were killed when an Iraqi warplane attacked the U.S. Navy frigate Stark in the Persian Gulf. (Iraq apologized for the attack, calling it a mistake, and paid more than $27 million in compensation.)

In 1996, President Bill Clinton signed a measure requiring neighborhood notification when sex offenders move in. (”Megan’s Law,” as it’s known, was named for Megan Kanka, a 7-year-old New Jersey girl who was raped and murdered in 1994.)

In 2002, former President Jimmy Carter ended a historic visit to Cuba sharply at odds with the Bush administration over how to deal with Fidel Castro, saying limits on tourism and trade often hurt Americans more than Cubans.

In 2006, the FBI began digging at a Michigan horse farm in search of the remains of former Teamsters leader Jimmy Hoffa; the two-week search yielded no evidence. It was announced that Paul McCartney and his second wife, Heather Mills McCartney, had agreed to separate.

In 2017, the Justice Department appointed former FBI Director Robert Mueller as a special counsel to oversee a federal investigation into potential coordination between Russia and the 2016 Donald Trump campaign. Pvt. Chelsea Manning, the soldier who was sentenced to 35 years in a military prison for giving classified materials to WikiLeaks, walked free after serving seven years behind bars, her sentence having been commuted by President Barack Obama.

Ten years ago: President Barack Obama strode head-on into the stormy abortion debate, telling graduates at the University of Notre Dame that both sides had to stop demonizing one another. In Sri Lanka, the Tamil Tigers admitted defeat in their fierce quarter-century war for a separate homeland. Barbara Mandrell, Roy Clark and Charlie McCoy were inducted into the Country Music Hall of Fame.

Five years ago: Colorado Gov. John Hickenlooper signed a “Right To Try” bill allowing terminally ill patients to obtain experimental drugs without getting federal approval. Thousands of cheering supporters welcomed Narendra Modi, India’s next prime minister, on his arrival in New Delhi after leading his party to a staggering victory in national elections. California Chrome won the Preakness to keep alive his bid for horse racing’s first Triple Crown since 1978 (California Chrome would finish tied for fourth in the Belmont three weeks later.)

One year ago: With six Democrats joining Republicans in voting to confirm her, Gina Haspel won Senate confirmation to become director of the CIA. The Miss America Organization announced that it would now have women in its three top leadership positions, after an email scandal in which male officials were caught making vulgar and insulting comments about past winners.