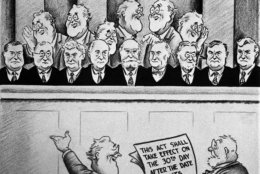 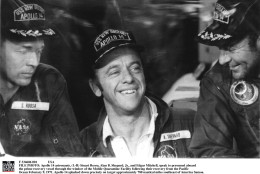 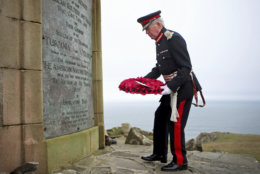 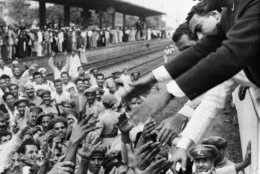 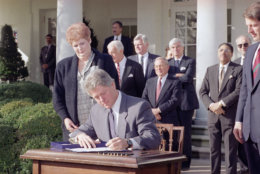 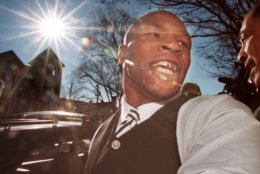 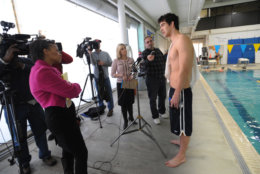 On Feb. 5, 1937, President Franklin D. Roosevelt proposed increasing the number of U.S. Supreme Court justices; the proposal, which failed in Congress, drew accusations that Roosevelt was attempting to “pack” the nation’s highest court.

In 1918, during World War I, the Cunard liner SS Tuscania, which was transporting about 2,000 American troops to Europe, was torpedoed by a German U-boat in the Irish Sea with the loss of more than 200 people.

In 1958, Gamal Abdel Nasser was formally nominated to become the first president of the new United Arab Republic (a union of Egypt and Syria which lasted until 1961).

In 1971, Apollo 14 astronauts Alan Shepard and Edgar Mitchell stepped onto the surface of the moon in the first of two lunar excursions.

In 1983, former Nazi Gestapo official Klaus Barbie, expelled from Bolivia, was brought to Lyon (lee-OHN’), France, to stand trial. (He was convicted and sentenced to life in prison — he died in 1991.)

In 1988, the Arizona House impeached Republican Gov. Evan Mecham (MEE’-kuhm), setting the stage for his trial in the state Senate, where he was convicted of obstructing justice and misusing state funds allegedly funneled to his Pontiac dealership.

In 1989, the Soviet Union announced that all but a small rear-guard contingent of its troops had left Afghanistan.

In 1999, Former heavyweight boxing champion Mike Tyson was sentenced in Rockville, Md., to a year in jail for assaulting two motorists following a traffic accident (he ended up serving 3 1/2 months).

In 2001, four disciples of Osama bin Laden went on trial in New York in the 1998 bombings of two U.S. embassies in Africa. (The four were convicted and sentenced to life in prison without parole.)

In 2002, A federal grand jury in Alexandria, Va., indicted John Walker Lindh on ten charges, alleging he was trained by Osama bin Laden’s network and then conspired with the Taliban to kill Americans. (Lindh later pleaded guilty to lesser offenses and was sentenced to 20 years in federal prison.)

In 2008, more than 80 tornadoes began touching down in the midwestern and southern U.S.; the deadliest of the twisters claimed 57 lives. Maharishi Mahesh Yogi, a guru to the Beatles who introduced the West to transcendental meditation, died at his home in the Dutch town of Vlodrop; he was believed to be about 90.

Five years ago: A U.N. human rights committee denounced the Vatican for adopting policies that it said allowed priests to rape and molest tens of thousands of children over decades. CVS Caremark announced it would pull cigarettes and other tobacco products from its stores. The state of Texas executed Suzanne Basso for torturing and killing Louis “Buddy” Musso, a mentally impaired man she’d lured to suburban Houston with the promise of marriage.

One year ago: Stocks took their worst loss in six and a half years, with the Dow Jones industrial average plunging more than 1,100 points. Jerome Powell was sworn in as the 16th chairman of the Federal Reserve. Former sports doctor Larry Nassar received his third long prison sentence, 40 to 125 years, for molesting young athletes at an elite Michigan gymnastics club. President Donald Trump accused Democrats of being “un-American” and perhaps “treasonous” for not clapping during his State of the Union address a week earlier.