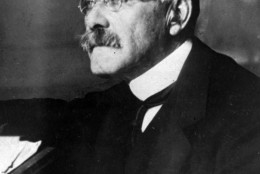 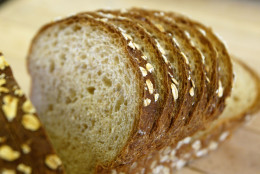 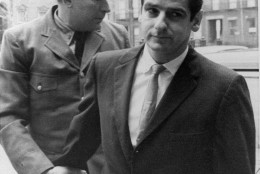 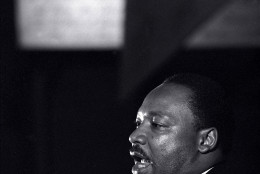 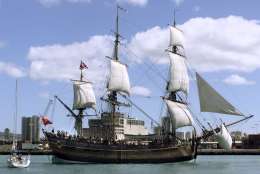 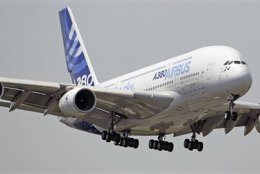 On Jan. 18, 1957, a trio of B-52’s completed the first non-stop, round-the-world flight by jet planes, landing at March Air Force Base in California after more than 45 hours aloft.

In 1911, the first landing of an aircraft on a ship took place as pilot Eugene B. Ely brought his Curtiss biplane in for a safe landing on the deck of the armored cruiser USS Pennsylvania in San Francisco Harbor.

In 1943, during World War II, Jewish insurgents in the Warsaw Ghetto launched their initial armed resistance against Nazi troops, who eventually succeeded in crushing the rebellion. The Soviets announced they’d broken through the long Nazi siege of Leningrad (it was another year before the siege was fully lifted). A U.S. ban on the sale of pre-sliced bread _ aimed at reducing bakeries’ demand for metal replacement parts _ went into effect.

In 1967, Albert DeSalvo, who claimed to be the “Boston Strangler,” was convicted of armed robbery, assault and sex offenses. (Sentenced to life, DeSalvo was killed in prison in 1973.)

In 1975, the situation comedy “The Jeffersons,” a spin-off from “All in the Family,” premiered on CBS-TV.

In 1991, financially strapped Eastern Airlines shut down after more than six decades in business.

In 1993, the Martin Luther King Jr. holiday was observed in all 50 states for the first time.

In 2001, President Bill Clinton, in a farewell from the Oval Office, told the nation that America had “done well” during his presidency, with record-breaking prosperity and a cleaner environment.

In 2005, the world’s largest commercial jet, the Airbus A380 “superjumbo” capable of flying up to 800 passengers, was unveiled in Toulouse, France.

Ten years ago: Israeli troops begin to withdraw from Gaza after their government and Hamas militants declared an end to a three-week war. A star-studded pre-inaugural concert took place on the National Mall, featuring Bruce Springsteen, Bono (BAH’-noh) and Beyonce, with President-elect Barack Obama and his wife, Michelle, in attendance. The Arizona Cardinals of the NFC advanced to their first Super Bowl with a 32-25 win over the Philadelphia Eagles; the Pittsburgh Steelers beat the Baltimore Ravens 23-14 to win the AFC Championship and reach their seventh Super Bowl.

One year ago: At the end of a visit to Chile that was meant to heal the wounds of a sex abuse scandal, Pope Francis accused victims of Chile’s most notorious pedophile of slandering another bishop; Francis said he would need to see proof that Bishop Juan Barros was complicit in covering up the sex crimes of the Rev. Fernando Karadima. Texas executed by lethal injection Anthony Allen Shore, who became known as Houston’s “Tourniquet Killer” because of the murder technique used on four female victims. Temperatures peaked at 104 degrees during second-round matches at the Australian Open.