Holidays: Best holiday plants | DIY holiday villages | Healthy meals you can make in minutes | Gifting on a budget | Send in photos of decorations
Home » Maryland News » Veterans pitch in at…

Veterans pitch in at the polls to ‘help make democracy happen’

When D.C.-area voters head to the polls on Election Day, chances are some of the people assisting in the process are veterans who've volunteered to help address the growing shortage of election workers across the country.
Listen now to WTOP News WTOP.com | Alexa | Google Home | WTOP App | 103.5 FM
(1/3) 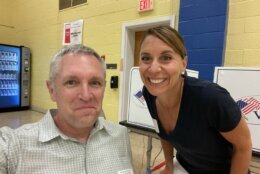 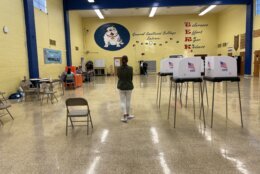 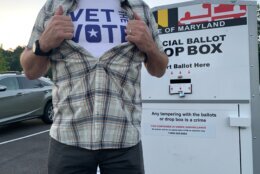 When D.C.-area voters head to the polls on Election Day, chances are some of the people assisting in the process are veterans who’ve volunteered to help address the growing shortage of election workers across the country.

Some of those veterans got involved through “Vet the Vote,” a nonpartisan coalition of 30 organizations with one goal in mind: to “help make democracy happen for our fellow citizens,” board member Joe Plenzler told WTOP.

Plenzler, who retired after serving in the Marines and lives in Charles County, Maryland, stressed that the organization has no political affiliation.

“It’s really important that folks understand that we’re operating at the level of civics and not politics,” he said.

At a time when skepticism about the integrity of the election process has grown, Plenzler said, “We realized that if 30% of our fellow citizens doubt the outcome of elections, we all lose.”

Plenzler described himself as a bit skeptical about how well the election and ballot counting process works.

Walking in to get training as a poll worker for the midterm elections, Plenzler said he wondered to himself, “How good is this?” However, after the four-hour training session, he left impressed by the redundancies built into securing the election process and convinced that the voting process in Maryland was “safe and secure.”

In 2020, his wife worked at the polls, calling it “probably the most meaningful thing” she’d done as a citizen.

“That’s a pretty big statement,” said Plenzler, who added that it led to both of them volunteering in this year’s election.

“One of the things I love about volunteering at the polls is that it’s one of the few places in today’s hyperpartisan environment, where Republicans, Democrats, independents, unaffiliated all come together, make democracy happen for the rest of our society,” Plenzler said. “And I find that a pretty unified and refreshing experience.”

Another benefit to veterans who are often transplants to new communities is how the experience can help them put down new roots, he said.

“It’s good to be further integrated in the community and work in some spaces I probably would never have gone into had I not volunteered,” Plenzler said. The experience allowed him to meet “some tremendous Americans, some tremendous Marylanders.”

On how veterans have already made great sacrifices to serve their country and yet are pitching in to help the voting process, Plenzler said working the polls was a “joy to do” and thinks other veterans would respond the same way.

This year — Vet the Vote’s first — the organization got 63,000 veterans and their families to sign up. The goal is to double that for 2024.

Not every veteran volunteering at the polls got involved through Vet the Vote. Some, such as Jerri Bell, a 20-year Navy veteran who lives in Calvert County, responded when the pandemic hit and staffing the 2020 election became especially challenging.

“Typically, election judges are retirees,” she said. “And many of them were physically vulnerable. And we didn’t yet have a COVID vaccine. And to me, it just seemed important to have people who are willing to take the risk and go out and do it.”

And like Plenzler, she found the experience to be a joy.

“I think that if people understood how good the training is, at least in Maryland, and how much fun it is,” Bell said. “I think that a lot more people would make time to do it.”

Bell agreed with Plenzler that the mission of ensuring the voting process is carried out properly is unifying.

“You’re working with your neighbors, and it doesn’t really matter what political party they are,” she said. “When you go into work as an election judge, you take an oath to basically uphold the Constitution and the laws of Maryland. It’s very similar to the oath that we took when we joined the armed forces.”

The experience also allowed Bell to reconnect with people at a time when the coronavirus pandemic had cut off many from their network of friends, co-workers and people in their communities.

You don’t have to be a vet to work at your local polling place. Read more about working as an election judge in Maryland on its board of elections website.

After narrow win and a super-short transition, Fitzwater readies an aggressive agenda in Frederick

New legislators get schooled on how to make friends, find success in Annapolis