Moore, Cox face off over credibility in Maryland governor’s debate 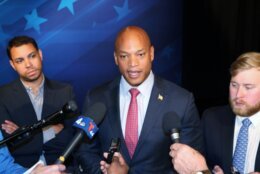 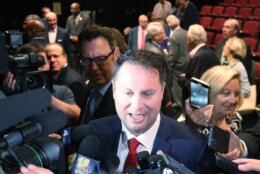 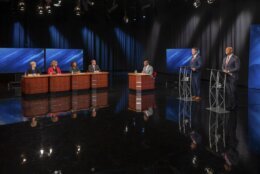 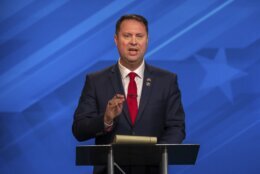 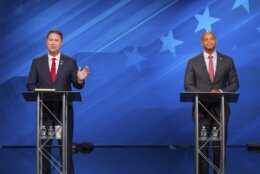 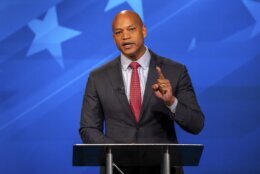 OWINGS MILLS, Md. (AP) — Democrat Wes Moore described Republican Dan Cox as “dangerous” for denying the results of the 2020 presidential election during a debate Wednesday in Maryland’s governor’s race, while Cox said Moore was a “phony” in an hourlong showdown that included frequent attacks on credibility.

In their first — and likely only — televised debate, Cox was asked by a panelist whether he would accept the outcome of next month’s election, noting that he had attended the “Stop the Steal” rally on Jan. 6, 2021, in Washington. Cox said he has “always accepted election results that are fair” but stopped short of saying he would definitely accept next month’s outcome.

“At this point, it would be similar to saying that before a surgery takes place to decide whether or not the surgery went well,” Cox said.

Moore said he will honor the results of the election in a state that has free, fair and transparent elections, and he criticized Cox for denying the outcome of the 2020 presidential election.

“Frankly, I’m standing on stage right know with an extremist election-denier whose rhetoric and his policies are not only dangerous and divisive, but will take our state backwards,” Moore said.

Cox said Moore has avoided debating him, because “he’s a phony,” criticizing his best-selling book for claiming he lived in Baltimore longer than he did.

Moore, for his part, said he is focusing his campaign on improving education and the economy, “instead of delving into conspiracy theories.”

“This is outrageous and ridiculous,” Cox said. “We are bigger than middle school name calling. … I am running to restore opportunity. Safety, affordability, freedom and education is my platform.”

The candidates also were asked about their positions on abortion rights, after the decision by the U.S. Supreme Court to strike down Roe v. Wade this year has brought the issue back to states to settle.

Moore said he believes “abortion is health care, and I fully trust women to make this decision with their doctors.”

“I want Maryland to be a safe haven for abortion rights,” Moore said, adding that he supports a constitutional amendment to enshrine the right to abortion in Maryland’s Constitution.

Abortion rights already are protected under Maryland law, and the General Assembly approved legislation this year to expand access to abortion.

Cox, who is opposed to abortion, noted the strong protections for abortion rights already in Maryland. He criticized a question from a panelist who asked why he opposed COVID-19 vaccine mandates but supported restricting abortion rights.

Moore, who has held double-digit leads over Cox in recent polls and could become the state’s first Black governor, is running to regain the governor’s office for Democrats in a state where they outnumber Republicans 2-1. Republican Gov. Larry Hogan is term limited.

Moore pounced on the fact that Hogan, a popular two-term governor, has described Cox as “unfit to lead.” Moore also highlighted that Cox sought to impeach Hogan this year over actions he took during the pandemic, a proposal that went nowhere in the Maryland General Assembly.

“And by the way, he stood alone,” Moore said. “Even his Republican colleagues did not back that.”

Asked to grade Hogan’s performance as governor, Cox said he would give the governor an A on everything except his actions during the pandemic.

Cox also said he has stood with the governor to support law enforcement.

“I applaud the governor for calling it out early for what it is — that this is a danger to the basic values of democracy,” Moore said, adding that he’s also thankful Hogan will not support Cox.

Cox said a Moore victory would risk bringing the state back to previous numerous tax increases approved before Hogan was elected in 2014. Moore emphatically denied any plans for tax increases.

A political novice, Moore holds a substantial edge in fundraising. He got a boost during the primary with the support of Oprah Winfrey, who began her broadcasting career in Baltimore and held a virtual fundraiser for him. Moore, a best-selling author, was CEO of an anti-poverty nonprofit. He served as a captain and paratrooper with the U.S. Army’s 82nd Airborne and saw combat in Afghanistan.

Cox is a first-term member of the Maryland House of Delegates who has been endorsed by Trump. He has a scheduled fundraiser with the former president later this month.

Suitland High School on lockdown after student shot outside