Proposal would change how some Md. counties elect commissioners

In five counties – St. Mary’s, Charles, Calvert, Queen Anne’s and Garrett – commissioners are elected by a countywide vote, regardless of what district they’re from. Del. Brian M. Crosby (D-St. Mary’s) called that system “anti-democratic” at a House Ways and Means Committee meeting Tuesday.

Crosby is sponsoring a bill that would require that, if a county commissioner is running to represent a specific district, that commissioner’s election must be decided only by voters within that district.

“The citizens of each county commissioner district have the right to select who represents their interests without influence from voters outside their district,” Crosby said.

In Garrett County, all commissioners run by district but are elected countywide.

Crosby said communities in his own county are disenfranchised under the current county-wide voting system. He said Lexington Park and Great Mills, some of St. Mary’s County’s most diverse areas, are “left without an advocate for their own communities’ needs,” because they lack power in electing their local commissioner.

Ongisa Ichile-Mckenzie, the executive director of Southern Marylanders for Racial Equality, said countywide elections for individual districts can dilute the voice of minority voters and lead to racial inequality.

“People’s voices should not be tamped down by the majority who live in other parts of their county,” Ichile-Mckenzie said.

She said many issues in her home county, Charles — including food deserts, aging infrastructure and the digital divide — would be better addressed if community members had more say in picking their county commissioner.

“Why has Maryland continued to be a state with haves and have-nots?” Ichile-Mckenzie said. “It’s because county commissioners rely on the will of the countywide majority to hold onto power.”

Ellen Kohl, an assistant professor of environmental studies at St. Mary’s College and an expert in human geography, said the five counties’ systems create “indirect structural barriers” that lead to a lack of diversity in local government and have a discriminatory impact on communities of color.

Kohl said that enacting district-level voting doesn’t guarantee more diverse government, but “opens the door” for people of color to have a better say in who represents them.

Counties’ officials, on the other hand, worry that the legislation is encroaching on their self-governance. James R. Guy, president of the St. Mary’s County Board of Commissioners, pushed back on the proposal. Appearing with two former Democratic commissioners and a current Republican commissioner, Guy, a Republican, charged that the proposal would “unilaterally undermine the will of the people” in his county.

“We all work to serve all of the county regardless of what district we represent,” Guy said.

“One fix doesn’t work across the entire state,” Moran warned.

Kevin Kinnally, legislative director for the Maryland Association of Counties, also opposed the bill. He said counties are concerned that the legislation “would infringe on local autonomy and flexibility in local governance,” and that such a proposal should be decided in the courts rather than the state legislature.

In other business, Ways and Means Committee members heard a proposal from Del. Kevin B. Hornberger, a Republican from Cecil County, that could lead to an overhaul of the state’s campaign finance system to include a real-time database.

Hornberger’s proposal would require the State Board of Elections to study and make recommendations regarding the “administrative, technological, legal, security, and fiscal requirements” that need to be met to give the public real-time access to campaign finance information for candidates.

Hornberger hopes such an overhaul of the state’s campaign finance system would make it the most “progressive and most transparent” in the country. Represent Maryland, a grass-roots voting rights group, has thrown its support behind the bill.

Committee members also briefly reviewed Gov. Larry Hogan’s (R) billion-dollar relief act. House Majority Leader Eric G. Luedtke, a Democrat from Montgomery County, told lawmakers that the House may make changes to the proposal as early as Wednesday. He said he has been in discussions with Hogan’s office and Senate leaders about how to move forward with the bill.

“We’ll be able to come up with something where everybody involved can vote yes,” Luedkte said. 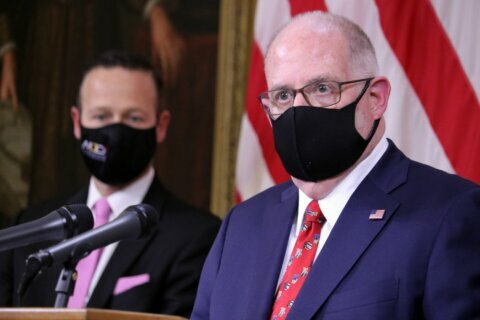