Brody Reppe is 8-years-old and during the pandemic, he learned how to ride a bike. The Westminster, Maryland, boy picked…
Listen now to WTOP News WTOP.com | Alexa | Google Home | WTOP App | 103.5 FM
(1/6) 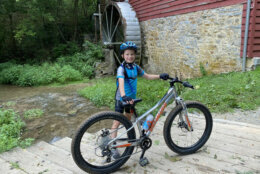 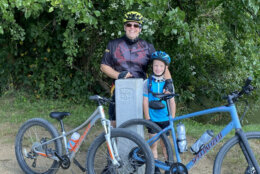 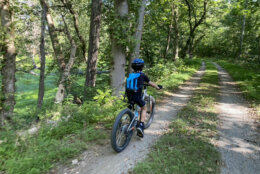 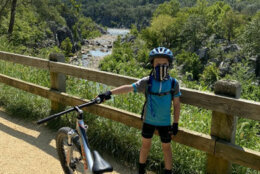 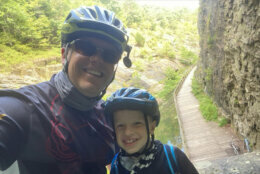 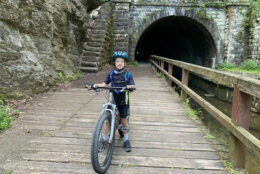 Brody Reppe is 8-years-old and during the pandemic, he learned how to ride a bike.

The Westminster, Maryland, boy picked it up quickly and loved it. Little did he know his new found freedom on two wheels would take him more than a hundred miles in 2020, and offer a chance to give back.

It all began with a bike ride with his father, Dan Reppe, down the Chesapeake and Ohio Canal National Historical Park’s towpath.

“We just went there to ride our bikes and we saw unpaved parts, and trees fallen on the trail, bushes fallen,” Reppe said.

When he asked his father about it, Reppe learned that maintaining all the trails takes a lot of money. Some of that money comes from donations which go to the C & O Canal Trust, the official nonprofit partner of the Chesapeake & Ohio Canal National Historical Park.

His dad also explained it’s been harder to raise those donations due to the pandemic.

“And he said he wanted to help, and I said ‘well how do you want to help?’ He said ‘maybe I could pledge that I would ride the whole C & O Canal and people would give me money,’” his father Dan said.

“I just decided it would be cool to raise money,” Brody said about the idea.

Brody’s dad called the trust to explain his son’s plan. Patricia Barber, director of development of the trust, said the call came at a time when the non-profit was looking for ways to recoup some of the money it lost from canceled events.

The decision was made to support Brody’s campaign as part of its peer-to-peer fundraiser called TowpathGO!, a program in which Brody was the only child to participate.

The plan was to split the trail into parts. Brody, with his dad pedaling behind him, got to work riding all but 50 miles of the trail. The final stretch, which happened in September, is where the fundraiser would come in.

Brody started by calling his grandma and grandpa to sponsor him. Then, with a Facebook post and some media coverage, the donations started pouring in. Before riding that last stretch, Brody raised $6,430 from 154 donors to help improve and preserve the trail and park, which will celebrates its 50th anniversary this year.

“It felt really good, it just made me feel that people actually care about the C & O Canal, it made my heart feel really good,” Brody said.

Brody said the trust was surprised when they found out just how much he had raised for the towpath.

“I love what a big heart he has,” his father said with tears in his eyes.

Dan Reppe said the journey has been special for him in many ways, from the many miles and hours of bonding with his young son on the trails, to seeing Brody stop at nothing to make a difference.

By keeping up with his son on the bike, dad also got healthier by losing 36 pounds, Dan Reppe said.

The Canal Trust nominated Brody for WTOP’s Top Kids program, and as a winner he will receive $500 dollars. What’s an 8-year-old boy to do with all that money? After hearing about his fundraiser, his answer may not surprise you.

That brought more tears to to his father’s eyes.

“The fact that when we told him that he won WTOP’s money and that he wanted to give a quarter of it back to the C & O canal, that was probably one of the proudest dad moments that I’ve ever had,” Reppe said.

As for the rest of the money, Brody said he is torn between saving it for college or buying Lego sets, which he enjoys building with his father.

For Barber, she said the trust fell in love with Brody’s story and was impressed by how much he raised.

“His enthusiasm and his willingness and eagerness to do something to help, and to kind of pay it forward, the joy and the pleasure that his dad got from this, it was just a really inspirational story for us,” Barber said.

For Brody, he said raising the money was important to him, that’s why he did it.

“So it [the towpath] can still be there and people can enjoy it as much as I did,” Brody said.

This article is part of WTOP’s TOP Kids program, where kids in the D.C. area are recognized for the amazing things they do. The winners are awarded $500. The program is sponsored by Northwest Federal Credit Union. Nominate a TOP Kid you know here, and view other winners here.