Just hours before the start of the 442nd legislative session, House Speaker Adrienne A. Jones (D-Baltimore City) vaguely hinted Wednesday that the situation placing Del. Daniel L. Cox (R-Frederick) at the center of an online campaign calling for his expulsion is being handled — though she offered no details.
Listen now to WTOP News WTOP.com | Alexa | Google Home | WTOP App | 103.5 FM

Editor’s note: This story has been updated to clarify Speaker Jones’ comments and to update the account of Del. Cox’s use of social media.

Just hours before the start of the 442nd legislative session, House Speaker Adrienne A. Jones (D-Baltimore City) vaguely hinted Wednesday that the situation placing Del. Daniel L. Cox (R-Frederick) at the center of an online campaign calling for his expulsion is being handled — though she offered no details.

Her comment came a week after Cox called Vice President Mike Pence a “traitor” in a tweet and arranged buses to Washington, D.C., for himself and his constituents to attend a rally that erupted in violence. 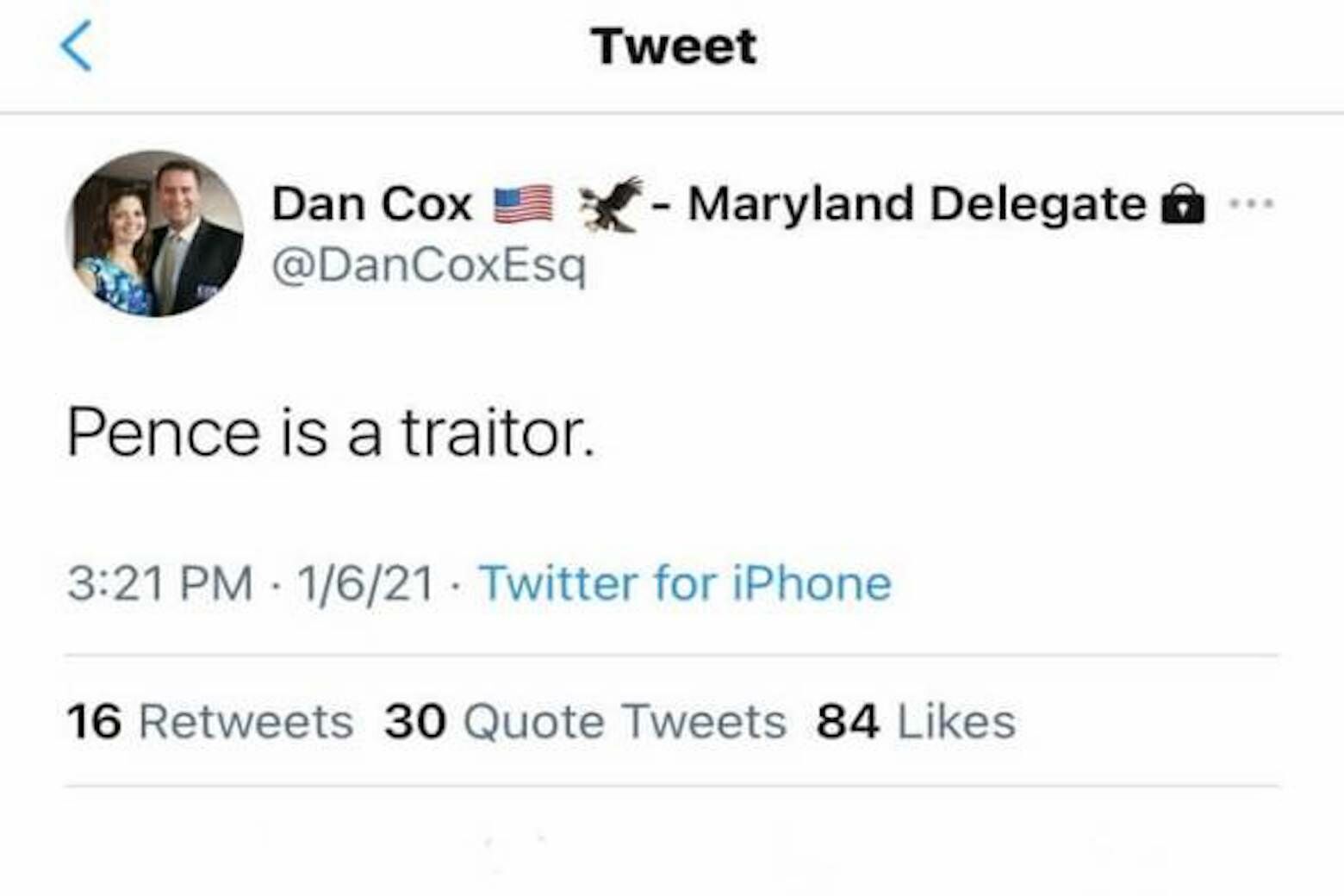 While Sears mentioned Cox’s tweet and presence in D.C. on the day of the attack, he did not refer to Cox by name.

Jones responded by saying that “that particular individual” received a lot of scrutiny from the public for his inflammatory tweets and, without going into any detail, told Sears that the “issue” is going to be “addressed.”

Often, bad behavior by a state lawmaker is referred to the Joint Committee on Legislative Ethics, whose members are bound to silence about whether an inquiry is underway.

Cox decried Pence as a traitor at the peak of the siege on Capitol Hill — an apparent reference to Pence’s refusal to overturn presidential election results as Congress was voting to certify the outcome. President Trump and many of his supporters have insisted that the election was stolen.

Two days after the attack on the Capitol, Cox released a statement condemning the mob’s behavior, adding that his caravan “left early” and “did not participate in any violence.”

“On Wednesday our group from Frederick was at the Washington Monument for the President’s speech in the frigid weather for hours and had trouble hearing as the speakers were so far away, and because of the massive crowd size could not approach the capitol, our group left early for the bus ride home and of course did not participate in any violence,” he said.

Cox’s statement is in direct conflict with Fred Propheter, one of the trip’s co-organizers and a member of the Frederick County Conservative Club, who wrote his account of last Wednesday’s events for a Frederick-based online publication called The Tentacle.

Maryland Matters has made several unsuccessful attempts to contact Cox, who still has not publicly addressed the tweet.

Asked at the same Daily Record event what he has taken away from this use of social media to promote political discourse, state Senate President Bill Ferguson (D-Baltimore City) replied: “Words matter.”

“When you serve in a role of leadership and responsibility representing the people of Maryland, what you say has reverberations,” he continued. “Something that we will continue to remind folks is that the level of political discourse and division has got to stop — it must change.”

Gov. Lawrence J. Hogan Jr (R) also condemned Cox’s tweet at a press conference earlier this week, going so far as to say that he didn’t even know who he was. 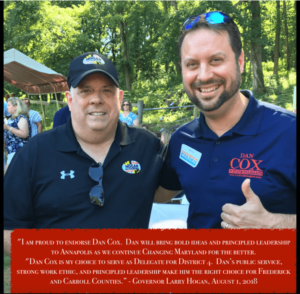 “I don’t even know who Dan Cox is. I know he’s filed suit against us multiple times,” Hogan said Tuesday. “He’s a QAnon conspiracy theorist who says crazy things every day. He called me a Communist Chinese spy for China. He called the vice president a traitor. He was down there gathering people at the capitol. I don’t even know what makes him think this way. But he’s certainly not the kind of person I would vote to put in the legislature or support in any way for anything.”

Following this statement, pictures of Hogan and Cox together found on Cox’s Facebook have circulated on Twitter.

The Washington Post published a letter that Cox wrote to the Joint Committee on Legislative Ethics Tuesday, clarifying his “poor choice of words” used in the tweet calling Pence a traitor while the Capitol was under siege last week.

He said he was overcome with emotion as the tour buses he helped arrange for the Million MAGA March returned to Frederick County last Wednesday.

“I intended the verbiage to convey a betrayal of us [Trump] voters and a deep disappointment,” he wrote. “Also, I had no realization of the gravity of the situation at the moment and with my very small twitter following had no intent to stir anything up, nor did I convey anything other than my sincere feeling of political betrayal.”

“In fact, I didn’t post it anywhere else and have since deleted it.”

Cox deleted the account he tweeted from last week, opting instead to move to Parler, a conservative social media platform that was shut down earlier this week.

While it remains unclear if Cox is under investigation by the legislature’s ethics committee, Maryland Matters reached out to Sen. George C. Edwards (R-Garrett) to inquire about the life cycle of an ethics complaint.

“It depends on the complaint, number one, and number two … there’s several different bridges” to cross to get “to the end-zone,” he said.

Edwards was not asked about Cox’s situation, specifically, but chose to remain vague so as to protect any lawmakers who may be under investigation. 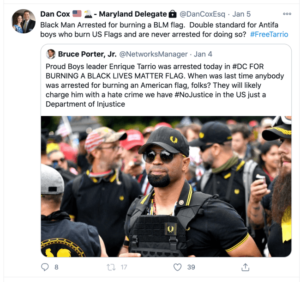 “I’ve certainly gotten some inquiries,” Dumais said. “If it’s brought to the committee we’ll have to talk about how to best handle it. But no decision has been made.”

Also not naming Cox, Ferguson told Sears during Wednesday’s summit that misinformation is a political tool used to pit people against each other.

“We are where we are right now because of the use of misinformation and propaganda to inflame emotions,” he said. “It is an intentional strategy that has been used to gain political advantage.”

“It cannot continue, it must stop.”

Ferguson applauded Congress for moving to impeach Trump a second time, explaining that it sends a message that the behavior of the Trump administration and the president’s followers will no longer be tolerated.

“The standard must change,” said Ferguson. “There must be consequences for these actions.”

Asked what constitutes the fine line between lawmakers’ First Amendment rights and situations where they deserve “consequences,” Ferguson, again, not naming Cox, pointed to the Joint Committee on Legislative Ethics, which he called “the appropriate venue.”

“It is done in a way that really tries to get to the facts, get to an understanding of what happened and make an appropriate decision as to what the consequences may be,” he said. “I have confidence in that system for cases like this and other ones.”

US Naval Academy moves students to hotel for COVID-19 quarantine 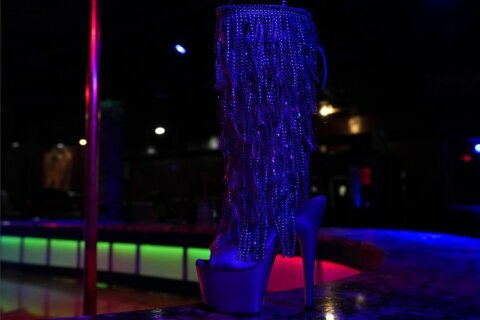