An altercation between a suspect and a St. Mary's County, Maryland, sheriff's deputy led to the suspect being shot and the deputy sustaining injuries that were not life-threatening.
Listen now to WTOP News WTOP.com | Alexa | Google Home | WTOP App | 103.5 FM

An altercation between a suspect and a pair of St. Mary’s County, Maryland, sheriff’s deputies led to the suspect being shot and the deputy sustaining injuries that were not life-threatening.

It happened Tuesday at 2:10 p.m. at a Big Lots store on North Shangri-La Drive near Great Mills Road in Lexington Park.

According to the St. Mary’s County Sheriff’s Office, the suspect had “an edged weapon” and attacked the deputy.

The sheriff’s office released an update on Wednesday, Dec. 30, saying deputy Carl Ball shot the suspect after both he and deputy Dylan Glenn were attacked with a knife outside the Big Lots store.

Ball was cut on the hand with the knife.

The release identified the attacker as John Sherman Greenwell, 41, of Lexington Park, Maryland.

The deputies were attempting to identify Greenwell in connection with the theft investigation when he attacked them.

Deputy Glenn was not injured.

Greenwell was hit in the arm. Both he and Ball were taken by helicopter to nearby hospitals.

Both men are expected to be OK. Ball has been discharged and is recovering at home. Greenwell is expected to be released into the custody of the sheriff’s office.

The Criminal Investigations Division, Crime Lab and Office of Professional Responsibilities are investigating the incident. 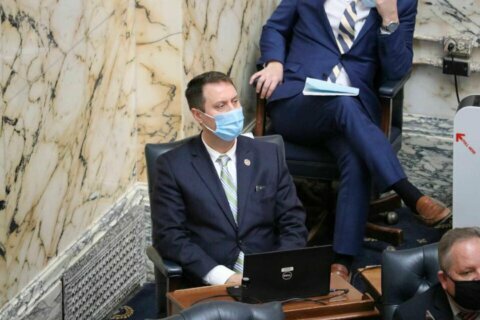