A pioneer in Md. educational equality passes away

Esther McCready, the first Black woman to be admitted to the University of Maryland School of Nursing, died Wednesday. She was 89.
Listen now to WTOP News WTOP.com | Alexa | Google Home | WTOP App | 103.5 FM

Maryland has lost an African American woman who set the groundwork for racial equality in education.

Esther McCready, the first Black woman to be admitted to the University of Maryland School of Nursing, died Wednesday. She was 89.

“From a little girl, 8 years old, I knew I wanted to be a nurse,” McCready said at a Maryland Historical Society event in 2012.

She recalled graduating from high school with honors and wanting to go to nursing school. But because she was African American, there were only two options available to her: She could attend the nursing school at the all-Black Provident Hospital or leave her home and attend nursing school in Tennessee.

The latter option was part of an agreement between a number of Southern states in an attempt to get around the requirement for separate but equal educational opportunities. If one state offered a professional schooling program, the other states would deny African Americans admission to any of their schools and instead send them to the program that allowed them.

The only exception that had been made for Black students before 1949 was for admission to law schools — it had been ruled for law students to study the laws of the state where they intended to practice.

But Esther wanted to go to a school close to home, preferably the Maryland School of Nursing, in Baltimore, which she had walked past her whole life.

“I said to another classmate, ‘It’s a shame we can’t go to any school we want to go to merely because of our race,’” McCready recalled.

So the two started writing to every school in the phone book, asking to be admitted.

But she did get a catalog and application from the Maryland School of Nursing. She filled it out and went to get her doctor for the medical exam that was required with the application.

“He said, ‘Did you contact the NAACP? And I said, ‘Why?’ He said, ‘You know you’re not going to get in there without their help.’ I said, ‘They sent me the application.’ He said, ‘That doesn’t mean anything.’”

She said she never knew for sure, but she believed the doctor contacted the NAACP for her, because she soon heard from the organization and was asked to meet with attorney Charles Houston.

Later that year, as the nursing school admission date was closing in, and she hadn’t heard back, she called them to inquire about her application.

“It was always ‘The committee on admissions is reviewing your credentials.’ That was their mantra,” she recalled. 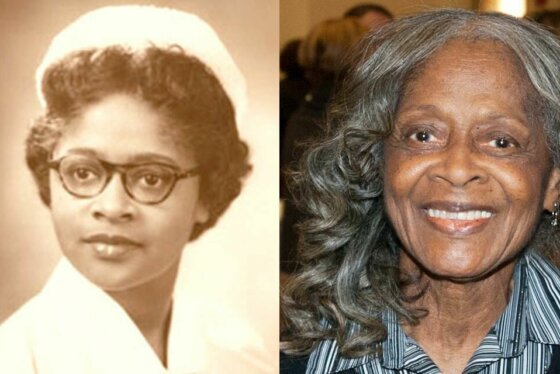 Gallery: 2020 local deaths of note
But when the admission date passed and she had not been admitted, the legal battle began.

Her first case was heard in the lower court, where she lost.

By the time the appeal came about, Houston had suffered a heart attack. So the NAACP called in another lawyer from New York — Thurgood Marshall, who would go on to become the nation’s first African American Supreme Court Justice.

“In April of 1950, the decision was handed down that the university had to admit me,” McCready recalled.

While the court case was done, her battle was not over.

When she started classes that fall, she was told she could not room at the school with the white students and was relegated to a special area to eat.

She graduated and went on to pass her nursing exam on the first try.

Over her career she worked in hospitals in Baltimore, Boston and New York. She also went on to earn degrees in music and education.

She then returned to Baltimore in her later years, spending a lot of time speaking to the younger generations with a message passed on to her from her mother.

In 2015, she was given an honorary Doctor of Public Service degree from the University of Maryland, in Baltimore, the very same school that denied her entry to their school of nursing 65 years before.

Services will be held at The March Life Tribute Center, 5616 Old Court Rd., Randallstown, Maryland. The funeral will be held on Thursday, Sept. 10, from 10 to 11 a.m.