Lawmakers in Annapolis, Maryland, are moving toward making it possible to bet on sports legally in the state, which might also help keep the Redskins in Maryland.
Listen now to WTOP News WTOP.com | Alexa | Google Home | WTOP App | 103.5 FM

Lawmakers in Annapolis, Maryland, are moving toward making it possible to bet on sports legally in the state, which might also help keep the Redskins in Maryland.

A bill moving through the statehouse would allow sport betting at nine locations in Maryland, including FedEx Field.

Maryland lawmakers added an amendment to the bill that would specifically allow sports betting at a football stadium in Prince George’s County.

Team owner Daniel Snyder has been talking to lawmakers in Virginia, D.C. and Maryland about building a new stadium for the team in the future. Snyder has said he wants sports betting to be allowed at a new site.

The amendment is viewed as a way for Maryland to sweeten the deal in an attempt to keep the Redskins in Landover.

Lawmakers in Virginia are working on similar legislation to try and get the Redskins to build a new stadium somewhere in Northern Virginia.

Snyder is telling lawmakers he has plans for a new smaller stadium to replace FedEx Field. In addition, the team would plan to build a new corporate headquarters and practice facilities.

Under the provisions of the bill, the Redskins would have to apply for a license to conduct sports betting and pay a $2.5 million fee.

The other six licenses would likely be given to the state’s casinos. Pimlico Race Course and Laurel Park would share a license.

Another would be awarded to the State Fairgrounds.

Maryland’s four off-track betting parlors would also have the right to accept bets on professional and college athletics.

The Maryland Senate is scheduled to take up the legal sports betting bill Friday.

If the plan is passed by lawmakers, voters would get final say with a referendum this fall. 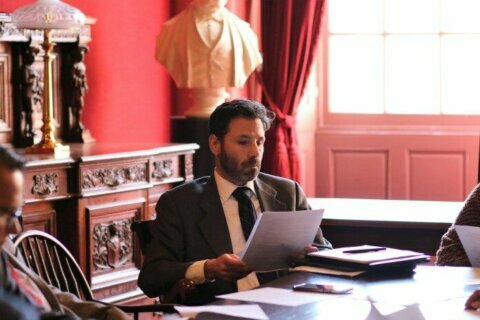