The 439th General Assembly adjourned a joint session in a moment of silence at midnight Monday night, and the only sound at the moment of Sine Die was the rustling of garbage bags as student pages dropped balloons on the House chamber floor.
Listen now to WTOP News WTOP.com | Alexa | Google Home | WTOP App | 103.5 FM
(1/6) 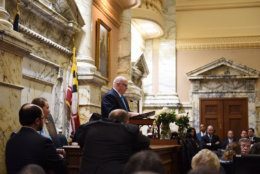 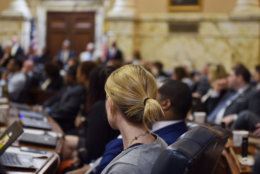 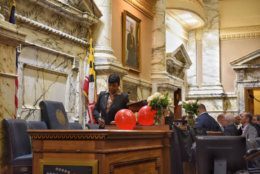 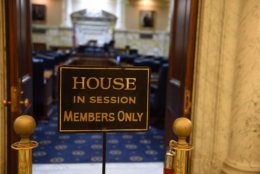 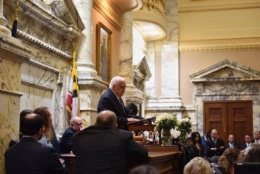 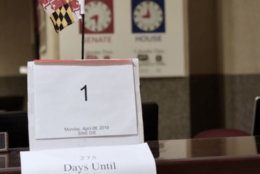 The 439th General Assembly adjourned a joint session in a moment of silence at midnight Monday night, and the only sound at the moment of Sine Die was the rustling of garbage bags as student pages dropped balloons on the House chamber floor.

The chambers adjourned in memory of the late Speaker Michael E. Busch (D-Anne Arundel), the longest-serving speaker in state history, who died Sunday at the age of 72 following a bout with pneumonia.

“I still feel his presence here,” Speaker Pro Tem Adrienne A. Jones (D-Baltimore County) said, after presiding over the chamber for more than 12 hours on Monday. She wore a pair of sneakers – something Busch was known to do for marathon sessions – behind the speaker’s rostrum, which was draped in black and flanked by white roses.

Busch and Jones served as a speaker-pro tem duo for 16 years together.

Many of the chamber’s leaders had spoken with Busch over the phone late into last week. He always wanted updates about what was happening in the House.

“He said he was getting stronger every day,” Environment and Transportation Chair Kumar P. Barve (D-Montgomery) said. “The spirit was strong, but the voice was weak. It started to scare me.”

Barve remembered Busch as someone who saw the good in everyone, no matter how flawed, and used those principles to guide his life and his work.

“Mike Busch was a man for whom life and love and policy were all motivated by the same very simple focus on what is good and decent – for individual people, for communities, or for situations,” Barve said. “He knew that life was fragile. He knew this before he became sick.”

Del. Talmadge Branch (D-Baltimore City), the House majority whip, remembered Busch as an honest leader who ran a tight ship – “and a fair ship” – and wanted the best for Maryland’s school children.

“When my grandson passed, he called me probably every other day. And then, didn’t just come to the funeral, but he stayed the entire time and then had a trooper stay with me the rest of that day,” Branch said. “Unbelievable. An unbelievable man with an unbelievable heart.”

Minority Leader Nicholaus R. Kipke (R-Anne Arundel), when he was first elected, was so excited to get settled in office and had an early telephone conversation with Busch, in which the speaker shared an old story from his coaching days.

In the 1970s, the speaker coached a St. Mary’s High School football team in Annapolis. Busch recalled a game when they played a rival high school across the Severn River. A player named Ken Kipke was the running back of that rival high school and returned a punt for a touchdown in the waning moments of the game.

Ken Kipke, of course, was the delegate’s father.

“Initially I thought, man, this connection might help me down there. But obviously he never forgot about losing that game,” the younger Kipke said on the floor, drawing chuckles from a somber chamber.

But over time, Busch showed himself to be a caring leader who allowed debate and for all voices to be heard.

“Like all athletes, he wanted to win, but what he wanted most was to see that everyone would play the game fairly, with honor and with dignity,” Kipke said.

Gov. Lawrence J. Hogan Jr. (R) said that over 32 consecutive legislative sessions, Busch had become an “institution within the institution of state government.”

“Mike Busch was a man who strongly believed in strong policy to achieve good government. That was evident throughout his career and his countless legislative achievements, from advancing access to health care to improving our educational system and safeguarding the Chesapeake Bay, just to name a few,” Hogan said. “Even those who may not have always agreed with him on politics could not help but agree that Speaker Busch was a good and decent man. He was genuine, caring and kind. He was a mentor, a coach, a friend. And each and every one of us benefited from his wise counsel and steady leadership.”

Before they recessed to cross the hall for the tribute to Busch, senators paid tribute to their long-serving presiding officer, Thomas V. Mike Miller Jr. (D-Calvert), who has been receiving chemotherapy treatments following a cancer diagnosis just before session.

Despite being in visible discomfort for many weeks, Miller spent the better part of 14 hours presiding over the chamber’s chaotic final day, when hundreds of bills cross the desk.

Members of both parties stood in unison and gave Miller a prolonged standing ovation.

Miller showed patience as aides scrambled to keep pace with his auctioneer-style, moving bills through as quickly as possible — for the most part — to avoid disappointing any lawmakers who had labored all session on a piece of legislation.

“It’s been incredible watching you during this session — really inspirational,” said Sen. Robert A. Zirkin (D-Baltimore County), chairman of the Senate Judicial Proceedings Committee. “I just want to say — on behalf of the entire Senate — how much we absolutely admire everything you’re doing and everything you’ve done this session.”

Miller noted that he’s served as Senate president with three speakers of the House. There were good years, “but the really great years” were with Busch at the helm of the House chamber. “We made more progress, Republicans and Democrats, House and Senate, working together … than we did in the prior 20 years,” Miller said. “It’s largely because of the leadership of the speaker of the House of Delegates.”

Speaking through tears, Miller said the thing he admired most about Busch was his involvement as a father, with his two daughters. “He cared about his family and he combined it with his legislative service,” Miller said.

Miller invited Sen. Guy Guzzone (D-Howard), who served with Busch in the House, to say a few words.

As the final balloons fell on a quiet end of the session, Jones leaned into the microphone.