Michael Busch, the longest-serving Maryland House speaker in the state’s history who died Sunday at 72, is being remembered as a tireless advocate for the environment and the restoration of the Chesapeake Bay.

“Speaker Busch was a champion for the bay, environmental issues and many social issues throughout the state of Maryland,” said Alison Prost, Maryland executive director of the Chesapeake Bay Foundation.

“He was a dependable leader on bay restoration efforts and he’ll be sorely missed.”

After the Annapolis Democrat was elected speaker in 2003, there was a “noticeable change in the stature that environmental issues had in Maryland’s General Assembly,” Prost told WTOP in an interview.

Respected as a strong leader, good listener and consensus-builder, the speaker put his leadership behind efforts to restore the bay, she said.

“He made sure that the environmental committees had thoughtful leadership, membership and all the issues got a fair hearing and discussion,” Prost said. Michael Busch, the longest-serving Maryland House speaker in the state’s history, has died at 72, according to his chief of staff.

For Busch, an Annapolis native and longtime resident, the bay was his “hometown water,” Prost said.

“I’d like to think, you know, it’s his backyard … He grew up in Annapolis and lived his life here and raised his family here, so I think that it was more real to him,” she added.

Busch proved himself an environmental champion to the end. Against a veto from Gov. Larry Hogan, Busch sponsored a bill to bar the harvesting oysters in five waterways in the Chesapeake Bay.

The House overrode the governor’s veto Friday and the Senate did the same Monday, which is the last day of the legislative session, which is known as Sine Die.

“I want to make sure that in the chaos that is Sine Die in Annapolis that everyone looks around and takes a moment to appreciate the impact he had on the environment in Maryland, because it is an important one,” Prost said. “It is a legacy, and so I hope people can take time to put partisanship, their to-do list and just celebrate that for a few minutes.’

Prost said she hopes the next generation of leadership will follow in Busch’s footsteps.

It’s a critical time for bay cleanup efforts. The Chesapeake Clean Water Blueprint, a collaboration of six bay states and the federal Environmental Protection Agency, set a 2025 deadline for states to fully implement plans for reducing and limit pollution in the bay’s waterways.

“We really need to accelerate in some areas especially in the face of threats like climate change, so I would like to think that the leadership, the stature that he provided to environmental issues will continue under new leadership in the House of Delegates … It’s not time for the environment to take a back seat to other causes,” Prost said.

“There being 140 members present, the House is still in session,” she said.

The 90-day session will close with a tribute to the late house speaker Monday night.

WTOP’s Nick Iannelli and Kate Ryan and The Associated Press contributed to this report. 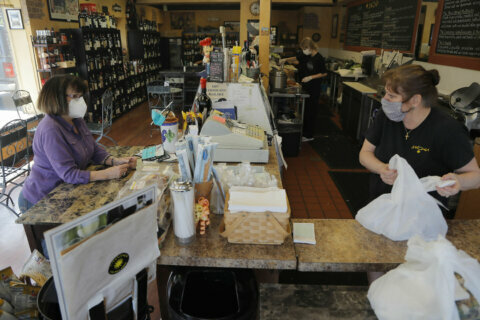