Maryland Gov. Larry Hogan spoke, saying he called Busch while the lawmaker was in the hospital.

“Just days before he passed away, I was fortunate to have the chance to have a few last words with the speaker. I had called him in the hospital, just to check in on him, just to let him know we were all thinking of him, praying for him,” Hogan said.

“A few years earlier, he had done the same thing for me when I was facing my battle with cancer. That’s the kind of person Mike Busch was,” the governor added. 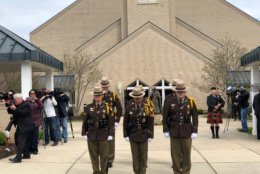 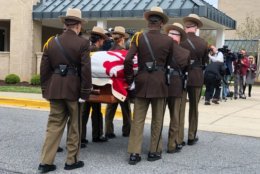 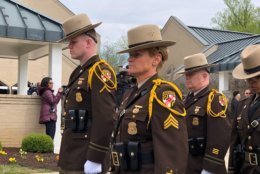 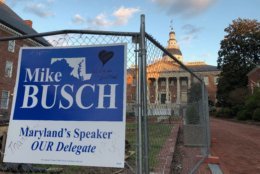 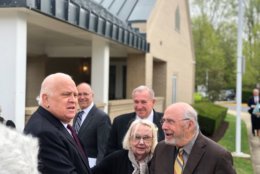 Bruce Poole, a former member of the General Assembly and longtime friend of Busch’s, talked about meeting the then-freshman lawmaker in 1986, and how Busch’s gregariousness and ability to work things out made him a natural for the job of speaker of the House.

He tried to sum up all of the things Busch worked on while serving in the House, saying that children would be educated in schools, patients would be healed in hospitals, citizens would be made wiser in libraries, “and, maybe, just maybe, we’re all going to swim in a Chesapeake Bay that is cleaner. All because of the efforts of Mike Busch and the Republicans and the Democrats that he worked with.”

“Mike’s voice will be heard, because he wasn’t just speaker of the House — he was speaker for us all,” Poole added.

Jay Schwartz, another longtime friend of Busch’s, took a jab at some of the political maneuvering that occurred after Busch’s death on April 7.

Schwartz peppered his speech with baseball references, and joked about how when asked to come to a party where sonnets from Shakespeare were being read, Busch stood up to recite stanzas from his favorite poem, “Casey at the Bat.”

But Schwartz also told the crowd at the funeral that Busch “would have been shocked and outraged by the minions who tried — again, in baseball parlance — to fast pitch a vote for the new speaker on sine die Monday.” It was a reference to reports that some delegates had already begun working to gain support of their colleagues to be elected to the spot Busch held for 16 years.

Again and again there were references to Busch’s love of his family, his wife, Cindy, and his daughters, Erin and Megan.

The two sisters — one in grad school, another in college — stood to speak to the crowd, with Erin, the older daughter, speaking first.

Before talking about how her dad had always showed his love and support, she talked about how every Sunday night, he would call her and say, “This is your dad, Mike Busch.”

As the crowded church broke into laughter, she added, “And he said it in his political voice and everything!”

She added, “He was my coach, my teacher and my best buddy,” tearing up as she finished her remarks, “Thank you, dad. I love you for everything.”

It was then Megan’s turn to speak. She talked about how she would visit the Maryland State House with her father, and how she and her sister found that most state house offices kept a stash of chocolate, something that delighted her.

She also referenced her father’s reputation as a coach. After a school basketball game in which she blew each and every layup, she recalled a silent ride home. Then, once she and her father arrived home, he told her to get a ball, get in the backyard and practice her layups until he said to stop.

“And let me tell you,” she said with a laugh, “after that day, my shot percentage went way up!”

Turning serious, she said, “I would never be the person that I am today, or the person I hope to be in the future, without him pushing me and teaching me to be strong.”

Outside of the church after the funeral, the two daughters walked with their mother between them, supporting Cindy Busch as they approached the casket carrying the remains of the late House speaker.

The flag that had draped it earlier had been folded and was presented to Cindy Busch by Hogan, with state Senate President Mike Miller standing by.

Busch was 72 years old; he is the longest-serving House speaker in Maryland history.