For years, Montgomery and Howard counties have had an informal agreement to investigate deaths that happen at the hands of each other's police officers; now, they've made it official and hope it builds trust and transparency. "We know that there are certain segments of our community that do not think the criminal justice system is always fair to them," said Montgomery County's state's attorney.

Whenever a person dies at the hands of the police, a lot of scrutiny and skepticism are applied. Now, Montgomery and Howard County prosecutors have formalized an agreement to investigate each other’s fatal police incidents in an attempt to bring transparency to the inquiry.

“What we’re attempting to do is build public confidence in the integrity, transparency and fairness of these investigations,” said Montgomery County State’s Attorney John McCarthy. “There might be some kind of impression that the fix is in, or it’s not a fair or impartial review.”

The memorandum of understanding, signed Tuesday with Howard County State’s Attorney Rich Gibson, formalizes an oral agreement between the two counties that has been in place for years, to prevent a county’s prosecutors from investigating deaths caused by officers of that county’s police.

“We know that there are certain segments of our community that do not think the criminal justice system is always fair to them,” McCarthy said.

After determining whether the involved officer should face criminal charges in the death, the investigating prosecutor will provide a written memorandum to the prosecutor where the death occurred, “outlining the basis of their conclusion regarding the matter investigated.”

In addition, the memo “will state the steps taken during the investigation of the case, the facts gathered during the analysis of evidence, and the legal reasoning that substantiates the final decision related to the case.”

While the goal of the agreement is to promote transparency, it includes a provision that reads, “The memorandum will be considered work product and confidential and the document itself is not to be disclosed to the public.”

However, McCarthy said Friday he will post almost all of the details included in a Howard County investigation into the Jan. 16 death of Mikyas Mehary Tegegne, 31, who was shot and killed after trying to rob the BB&T Bank on Wayne Avenue, near the Silver Spring Metro station.

“For the lay people who happened to be in the bank at the time, or the bank employees, I’ve deleted their personal information, but the details of the investigation and the thoroughness, it’s all there,” McCarthy said.

The first-of-its-kind agreement in Maryland may eventually be replaced with another independent investigating body in police killings, currently being used in a few other states.

“It goes to a statewide body of independent investigators for the state police,” McCarthy said. “I think we’re a precursor to something like that, and I think that’s what the majority of the public wants.”

McCarthy said he understands the concern, and in some cases mistrust, from survivors and families, when the person killed is a minority: “These are sensitive matters.”

However, McCarthy said he hopes having another jurisdiction’s prosecutor consider whether such a death was justified or criminal will provide fairness.

“That’s the objective, and it goes beyond the ego of thinking, ‘Well, I can do this,'” McCarthy said. 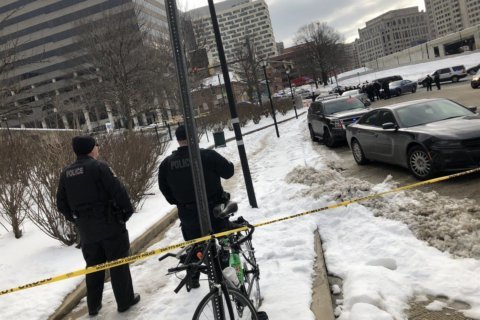