Maryland may shift to a tolling structure in an effort to reduce congestion and encourage carpooling on both Interstate 270 and the Capital Beltway.
Listen now to WTOP News WTOP.com | Alexa | Google Home | WTOP App | 103.5 FM

WASHINGTON — Maryland has eliminated ideas for significantly expanded transit and for new regular or HOV lanes on the Capital Beltway and Interstate 270, to focus on adding promised toll lanes of some kind, according to a new status update on Gov. Larry Hogan’s public-private partnership plan.

According to the information quietly posted online Wednesday, the options remaining in contention for the program include toll lanes on the Beltway and I-270 that would charge all users or toll lanes that would be discounted or free for people who meet HOV requirements. The plan has always been pitched by the Hogan administration as toll lanes around the Beltway and up I-270.

The remaining plans under consideration would each eliminate the split between the through and local lanes on I-270, which could allow for more or the same number of travel lanes within the existing width of the road. The Beltway plans each include additional lanes next to the current ones.

See the gallery below for screen shots of some ideas that have been discarded, and others that are still under consideration. 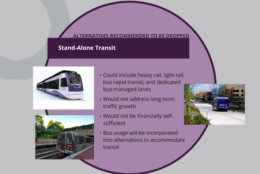 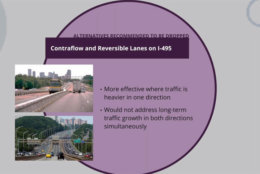 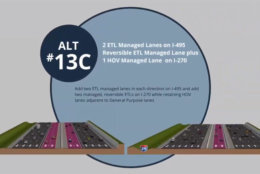 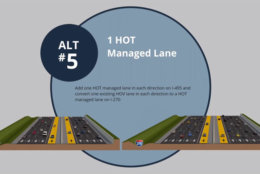 Around the Beltway, Maryland has cut back the proposal to no longer include the toll lanes through all of Prince George’s County. Potential private contractors had projected a stretch between Joint Base Andrews and the Wilson Bridge would be least profitable, but could be paid for in part through the operation of the other segments, but the state said the phasing is based on the need for additional coordination with Virginia.

The ultimate project is now set to include some type of new lanes from near Shady Grove south to a rebuilt American Legion Bridge, and from the Legion Bridge east around the Beltway to just west of Maryland Route 5.

The Beltway lanes to and across the Wilson Bridge could still be built later as part of a separate study with Virginia meant to eventually extend toll lanes around the full circumference of the Beltway to Springfield. Likewise, lanes on I-270 could later be extended past Shady Grove to Frederick at some point in the future.

Even when a final decision on the preferred construction plan is reached early next year for presentation to the public, the actual lanes remain years from operation, and would eventually be built in phases probably.

According to a letter Transportation Secretary Pete Rahn sent to legislators in Annapolis Wednesday, the first phase of contracting would be rebuilding the American Legion Bridge and parts of Beltway east to Interstate 95. The second phase of contracting would include one deal to build and operate the lanes from I-370 to the Beltway on Interstate 270 and another to build and run the lanes around the Beltway to near Maryland Route 5, and would begin after a contractor is chosen for the first phase. Any extensions beyond that would come in a third round of contracting sometime later.

Rahn’s letter also highlighted the need for any project to help move trucks or other freight traffic through the region, and emphasized that any deal with private companies would include incentives to avoid taking homes for the project.

Precise details of the layout of each proposal and the amount of widening required are not yet available, since that is part of upcoming additional work on the study. The high-level alternatives kept for study did not differentiate between options to rebuild the Legion Bridge, which opened in 1962.

Public meetings are planned in April.

Virginia is planning to extend its tolled Express Lanes to the Legion Bridge to meet up with future Maryland lanes, but expects the extension beyond the Dulles Toll Road could open before completion of any Legion Bridge improvements or the opening of the first Beltway toll lanes in Maryland.

In that case, the Virginia project run by 495 Express Lanes operator Transurban would probably include a single lane allowing an exit or entrance to or from the George Washington Parkway while the other of their two lanes ends just before the bridge, VDOT Megaprojects Director Susan Shaw told Fairfax County supervisors this week.

The options remaining in contention in Maryland are:

Options eliminated from any detailed study include:

A number of local leaders in Montgomery and Prince George’s counties remain concerned that widening tied to the project could disrupt neighborhoods and communities. The state said the project is meant to improve traffic flow.

Lawmakers in Annapolis are still considering proposals that would give the local governments veto power over any toll-lane plan.